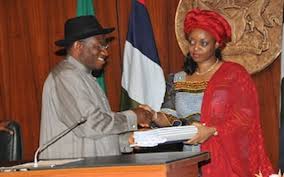 The ongoing probe of former Pres Jonathan’s administration by President Muhammadu Buhari is to find out the  dealings behind the alleged purchase of 3 mobile stages, that cost $6.9m, Presidency source has said.

According to a document, which was obtained from the Presidency on Saturday, the deal, which is now a subject of investigation, was allegedly carried out by Jonathan; his Chief Security Officer, Mr. Gordon Obuah; and former Minister of Petroleum, Mrs. Diezani Alison-Madueke.
The fund was said to have been withdrawn from one of the numerous accounts of the Nigerian National Petroleum Corporation, NNPC, for the purpose of buying 3 pieces of 40-feet mobile stages for use by Jonathan during mass public speaking events.
According to the document, apart from the fact that the sum for the stages was “incredibly inflated”, there is currently no evidence that the stages were bought since the money was withdrawn.
The document read”

“While the cost of mobile stages ranges in sizes and designs, only outlandish rock star musicians in Europe and the US spend hundreds of thousands on their huge stages way bigger than the 40-feet stages.

“Even then, those musicians and superstars would not pay over $2m per stage, according to industry sources.

“The process of procurement of the three mobile stages was neither known to extant Nigerian laws and due process regulations nor were the offices of the Auditor-General and the Accountant-General in the know, according to the investigators.”

It added that the phony purchase was carried out in late 2011, a few months after Jonathan won the presidential election for a full term after having completed the term of the late President Umaru Yar’Adua.
Jonathan’s CSO was said to have initiated a memo to the former President on October 17, 2011, asking for the purchase of three mobile stages.
He was reported to have written in that memo to Jonathan that memo referred to “my earlier discussion with Your Excellency on the security implication of your public appearances and your subsequent directive on the need to procure a secured presidential platform.”
The Presidency source said on the same day, without any financial advice or purchase order reviews, the former President approved the request to buy the three stages and minuted the memo to the then Minister for Petroleum Resources.
In his minute, Jonathan was said to have written, “We have discussed this, please deal.”
According to the document, on the same October 17, the Senior Special Assistant to the President on Administrative Matters, Mr. Matt Aikhionbere, did another letter on the strength of the President’s approval requesting the minister to take action on the request to purchase the stages for $6.9m.
It added, “By the next month, an NNPC payment voucher, number 3840336, was already in place, revealing that the money was released.

“NNPC directed that the money be taken from one of its accounts in New York CITIBANK with sort code CITIUS 33, and Routing number 021000089.

“It was first routed from the US bank to an NNPC account in Zenith Bank account number 5000026593, Maitama branch in Abuja, from where the money was sent to a private account.

“The sum of $6.9m was then credited to a Sterling Bank account of one J. Marine Logistics Limited, Abuja, a company investigators said was registered by Obuah.

“The CSO himself, according to investigators, has not been able to show proof of the purchase and his memo irked his bosses at the SSS that he took the initiative to write requesting for the stages, an action which officials said was way above his pay grade.”

“The former President approved the procurement of the mobile platforms without due process and bypassing the Procurement Act; neither was there an appropriation in the 2011 budget for such facility,” the document quoted investigators as saying.

It added that neither the then Minister of Finance nor the Director-General of the Budget Office was aware of the deal.

“Investigators say this is just one of the several instances, where the Jonathan administration used secret NNPC accounts to fund many questionable projects and for alleged personal financial aggrandisement.

“Already, the CSO has been questioned over his role and activities in the Jonathan Presidency. It will be recalled that he was arrested, detained, questioned and later released.

The National Publicity Secretary of the Peoples Democratic Party, Chief Olisa Metuh is set to respond to the allegations.
Punch

For the re-election of Governor Babajide Sanwo-Olu and the realization of the presidential ambitions of the All Progressives Congress (APC)...

By Aishat Momoh. O. Asiwaju Bola Tinubu, the party's standard bearer, has informed the All Progressives Congress Campaign Council that...

DAMI   Former Secretary to the Government of the Federation, Babachir Lawal, say that the northern Christians are in support...

By Aishat Momoh. O. For the third year in a row, there have been no armed robberies against banks or...

DAMI . L   A Federal High Court sitting in Port Harcourt, has disqualified the Governorship Candidate of the All...