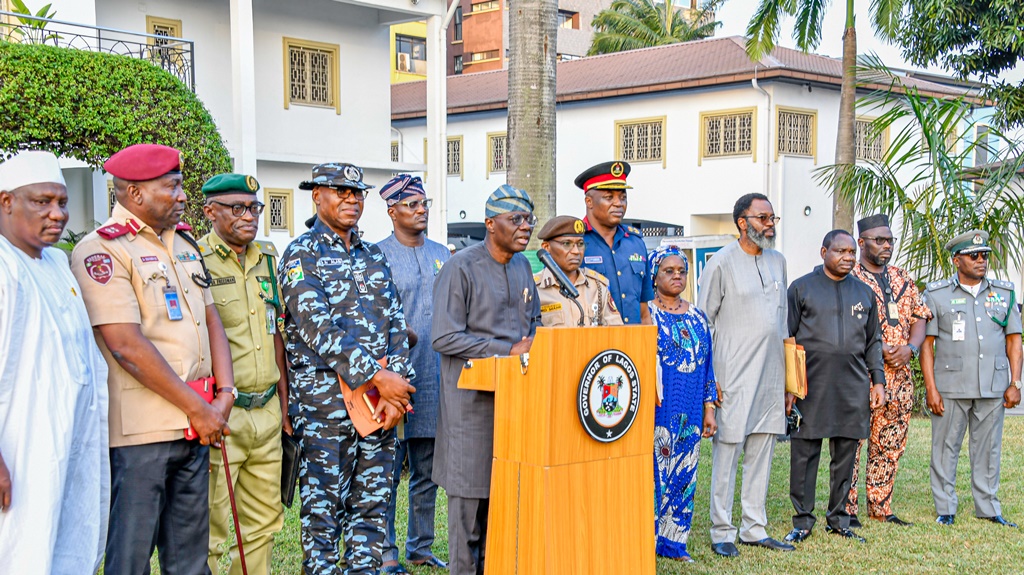 Lagos State Governor Babajide Sanwo-Olu, on Friday, received firsthand briefings on the level of alert from the commanders of all security formations in the State.

This is coming against the background of the reported security threats to the city of Lagos. The security chiefs briefed the Governor during the State security meeting held behind closed doors at the Government House in Marina.

Rising from the meeting, Sanwo-Olu disclosed that members of the State Security Council had reviewed the situation across flashpoints in the State, directing improved vigilance to neutralise intending threats.

The Governor allayed the fears of the residents, telling them there was no reason to panic. He said all security formations had been put on high alert to ensure public safety.

He said: “In the last three and a half hours, we discussed the current security situation in the State and we have reviewed where we are. We have our heads together and come up with a strategy that is assuring to our citizens. Our men are alive to their responsibilities and they are ready to ensure safety of lives and properties of our citizens is not compromised in any way.

“All of the security agencies have been activated not to cause panic; they have been reassured of not only the support of the State Government, they also have been encouraged to be vigilant in their statutory responsibilities.”

Sanwo-Olu told the residents to be law-abiding and not to hesitate in raising an alarm when they notice suspicious activities around them and in their communities.

The Governor said security remained everyone’s business, urging the residents to work with the Government in containing any threats that could potentially disturb the peace in the State.

“I urged our citizens to continue to go about their lawful duties and be law-abiding. Security is everybody’s business. We implore our residents to join us in this effort, and say something whenever they notice suspicious activities around them,” the Governor said.