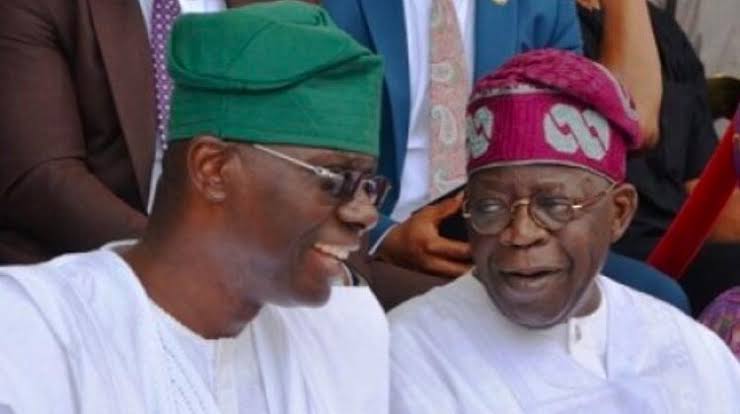 Members of the Lagos chapter of Yam Dealers and Traders Association of Nigeria have declared their support for presidential candidate of the All Progressives Congress (APC), Asiwaju Bola Ahmed Tinubu, and the party’s gubernatorial candidate in Lagos, Governor Babajide Sanwo-Olu.

The yam dealers, in their numbers, led an endorsement rally to the Tinubu-Shettima/Sanwo-Olu-Hamzat Independent Campaign Council (ICC) office in Ikeja GRA, brandishing tubers of yam and their permanent voter cards (PVCs).

The traders were received by the Deputy Governor, Dr. Obafemi Hamzat, and the ICC Director-General, Mr. Tayo Ayinde.

Kehinde Olaosebikan, chairman of the association, said the rally was a way of conveying the yam traders’ appreciation to the APC Government in Lagos for several interventions, which, he said, had benefited the association’s members greatly.

Dr. Hamzat told the traders that the endorsement rally for the Tinubu and Sanwo-Olu tickets was first leg of their responsibility towards ensuring the success of the candidates at the polls. The second leg, the Deputy Governor said, is to galvanise all their members to vote en mass for APC at the elections.

He urged some of the association members who were yet to get their PVCs to do so within the time window announced by the Independent National Electoral Commission (INEC), urging the electorate to prepare total

Hamzat said: “The coming general elections are crucial for our party and State. We must show our strength and numbers, because we are not just going to vote; we want to humiliate the opposition parties with a very wide margin. We have over seven million voters in Lagos alone and our target is to deliver five million votes to elect our presidential candidate. By the support we have received from your association, we believe the margin is attainable.

Those contesting against Tinubu and Sanwo-Olu are political clowns who don’t understand anything about governance. We must use our votes to retire them. Tinubu is not only fit to run for president, he is the smartest political personality of this period. He is bold, intelligent and influential. We have a Governor in Lagos who is making positive impact on the lives of citizens. For us continue to see the amazing projects delivered, you must return Sanwo-Olu to power. Your endorsement is a great step, but this must be completed by voting massively for APC.”

The Deputy Governor said APC’s agricultural programmes and policies had raised the level of food security in the country, noting that the Sanwo-Olu administration had recently flagged off the construction of what would be the largest Food Security Systems and Central Logistics Park in sub-Saharan Africa.

Dr. Hamzat said part of the objectives of the food park, being built on 1.2 million square metres of land in Ketu-Ereyun, Epe, was to reduce the loss of peasant farmers and petty traders in the value chains.

The food park, he said, is a component of an audacious five-year Agricultural and Food Systems Road Map (2021–2025) launched last year by Gov. Sanwo-Olu to enhance food sufficiency in Lagos.

Ayinde hailed the yam traders for turning out to endorse Tinubu and Sanwo-Olu, stressing that the association’s support for the APC was based on unprecedented growth in food production and security achieved in the sector.

The gesture of the yam traders, he said, would boost the support base of the party in Lagos and increase the APC’s chance in attaining victory at the presidential election.

Ayinde urged the yam traders to mobilise their members into voting all the APC candidates running for legislative seats in the State and federal elections.

Olaosebikan said it was time to pay back Tinubu, whom, he said, was the first Governor in the current republic to create a small business loan scheme for petty enterprises in the informal economy.

The yam traders’ association chairman recalled how Sanwo-Olu came through for the yam sellers when they were threatened with ejection from their depot located around Berger axis. The Governor, Olaosebikan said, had not only protected their interests, but has also sustained the loan programme for petty traders.

He said: “We have embarked on this endorsement rally in support of our father, Asiwaju Bola Ahmed Tinubu, who saw our plights and rescued many of us from the grip of despair. Many of us could not own shops, much less stocking them with yams. Tinubu initiated a loan programme from which many of our members benefited. Some used the money to start businesses, which are still flourishing till today.

“This is a pay back time for the man who helped us. We are not in doubt that APC Government has done its best in supporting farmers and bringing about best policies to assist us. Sanwo-Olu has sustained the small business loan and we have members still benefiting from this scheme.” We are here with our PVCs to show that we have the numbers and strength to return APC to power in Lagos and at the federal level.”