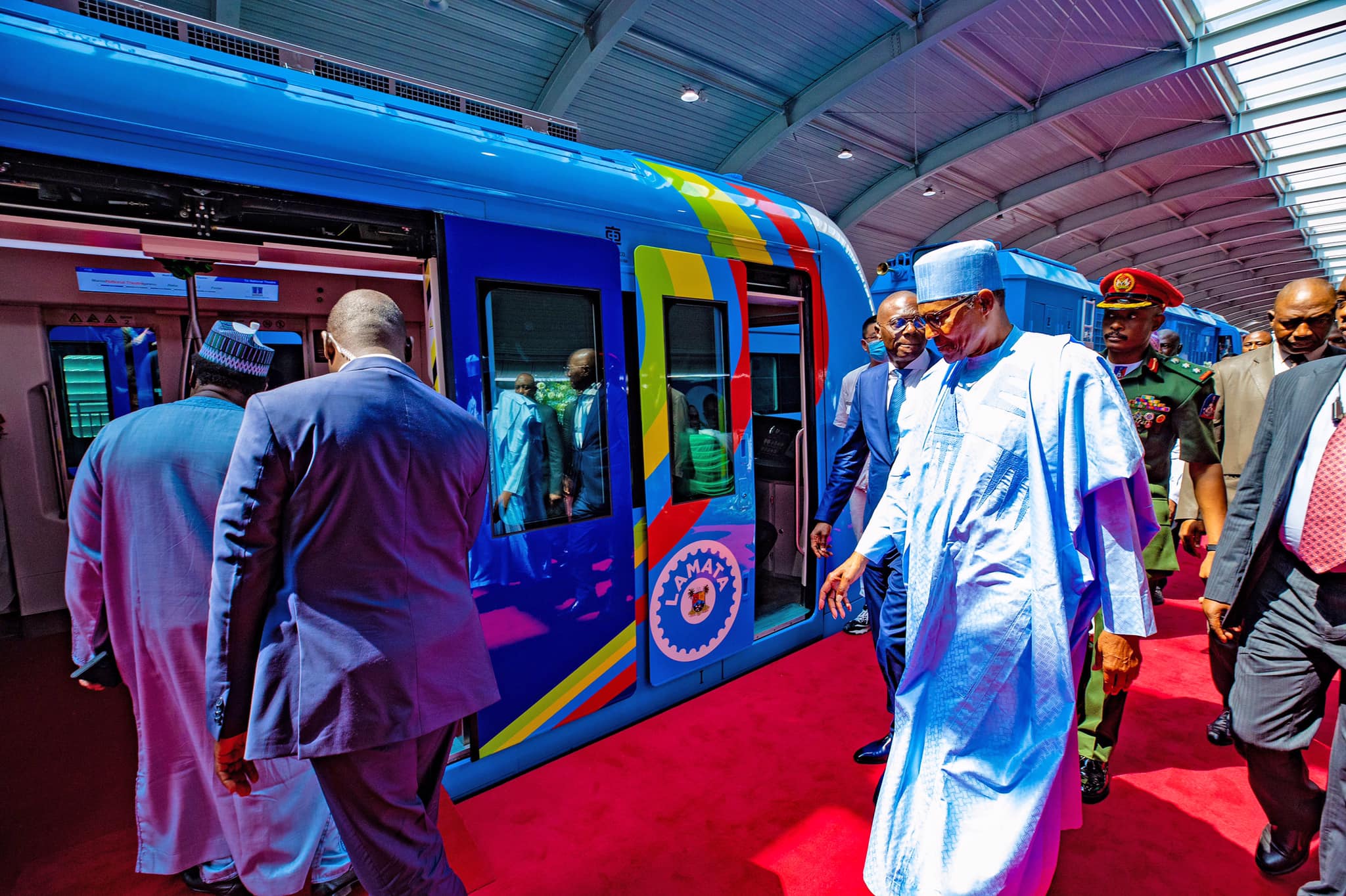 Lagos now officially has a State-operated rail system, with the commissioning of Blue Line Mass Transit by President Muhammadu Buhari on Tuesday. This historic moment climaxed the President’s two-day working visit to Lagos for projects commissioning.

The inaugural ride on the train was performed by the President in company of Governor Babajide Sanwo-Olu, his Deputy, Dr. Obafemi Hamzat, and other invited dignitaries.

The electric-powered train made a round trip between the iconic Marina station and National Theatre, enthralling crowds of citizens along the corridor. Residents watched in excitement as Lagos recorded yet another history in infrastructure delivery.

At the event, President Buhari supervised the signing of contract by Gov. Sanwo-Olu for the commencement of the project’s second phase, which will cover 14-kilometre stretch from Mile 2 to Okokomaiko.

Earlier, the President inaugurated John Randle Centre for Yoruba Culture and History – a museum built by the Lagos State Government to promote cultural renaissance. The museum is sited in Onikan, an artistic neighbourhood steeped in the rich history of Lagos.

Sanwo-Olu said the delivery of the Blue Line Rail was the culmination of the “timeless vision” of the State Government initiated by his predecessor and All Progressives Congress (APC) presidential candidate, Asiwaju Bola Ahmed Tinubu, whom the Governor described as “the architect of modern Lagos”.

Sanwo-Olu said the construction of the Blue Line could have been completed years before the APC took power at the centre in 2015, but said the project was slowed down by hostile policies of the then Federal Government being led by an opposition party.

He said: “Since 1999, Lagos has not enjoyed the kind of support it is receiving from the President Buhari administration since 2015. The socio-economic impacts of various projects we have commissioned during the President’s two-day visit bear testimony to the support and collaboration we have enjoyed from the APC-led Federal Government. Mr. President, we are proud in Lagos to be associated with your national vision for infrastructural transformation.

“The Blue Line we are commissioning today is a product of timeless vision by Lagos State, which dates back to the administration of former Governor Bola Ahmed Tinubu 20 years ago. One of his greatest legacies was the development of roadmap for the future of Lagos, which cleared the pathway for a modern, prosperous and competitive mega city. With the rail line, a journey of two hours will now take 15 minutes. This will improve quality of life for our citizens, while Lagos will grow to be one of the most resilient mega cities.”

Sanwo-Olu said the Blue Line would be operational after the completion of 750 Volt-ampere dedicated power supply source. The Governor said the iconic Marina station commissioned by the President was designed as Africa’s metro hub with a capacity to process 28,000 passengers per hour.

The Governor said the development of the State’s audacious rail infrastructure project was to increase mobility for commuters and raise productivity to energise the State economy. He said the ongoing construction on the Red Line, which extends 37-kilometre from Agbado to Ebute Metta, would be completed before the end of May.

Sanwo-Olu acknowledged the courage of his predecessor, former Governor Babatunde Raji Fashola, who started the Blue Line project despite opposition from the then central government. 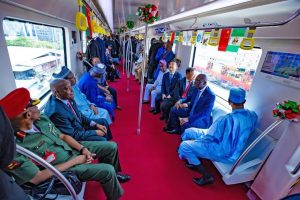 He said: “This rail infrastructure is for the benefit of our teeming citizens who daily endure the pain of traffic gridlock from their homes to workplaces. This is about bringing relief to your mobility challenges and ensuring Lagos works for you. We believe this will make your journey easier and better your lives. The Greater Lagos Lagos that we promised you is rising. You can see and feel it. This is a demonstration of purposeful government.”

Dr. Hamzat described the Blue Line as “the most audacious project” to be funded by a sub national in the history of the country, noting that the Sanwo-Olu administration took the steps to complete the project given its importance to solving transportation challenges in the State.

“The excitement about this rail project is justifiable, considering the fact that it will certainly help to reduce the pressure on our roads, enhance the economic wellbeing of Lagosians and put our dear State on the same pedestal as others of its stature. People come first in all that we do, because they are the bedrock of our government,” the Deputy Governor said.

The John Randle Centre, originally built in 1928, used to serve as a hub for cultural tourism, recreation and entertainment. Its reconstruction started in 2018.

Sanwo-Olu said the Centre fitted into the State’s overall objectives in Arts, Culture and Tourism as stipulated in the recently launched 20-year Arts and Tourism master plan towards making Lagos a tourism destination.

The Centre has an exhibition gallery, which chronicles the history of Yoruba, cultural evolution and journey from the race’s origins, through present day, to the future.