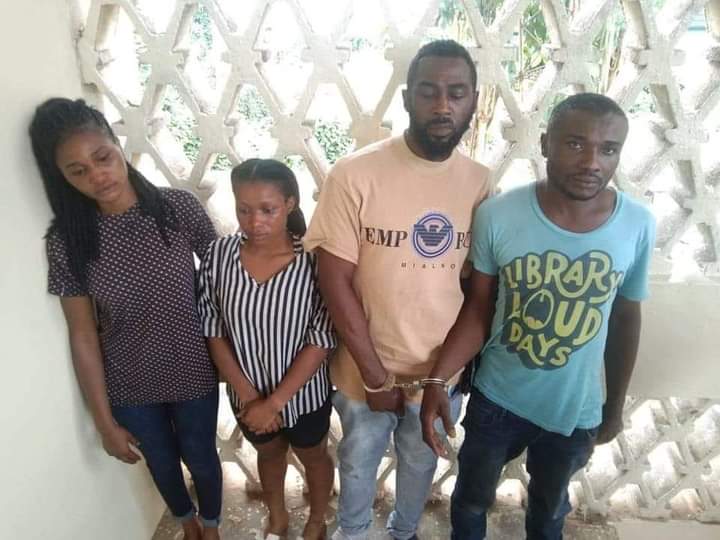 Four suspects, two men and two women, who are believed to be part of a gang that uses blackmail to extract money from victims, have been detained by the Anambra Police Command.

According to DSP Ikenga Toochukwu, Police Public Relations Officer, who made the announcement in a statement on Thursday, they specialize in photographing victims in their underwear and threatening to release the images online unless they pay money.

The suspects as identified by Ikenga are, Okechukwu Ogoejiofor, 36, Nonso Nwizu, 34, Esther Nwafor, 21, and Obianuju Nduba, 20.

According to him, the victims were detained in Ajakpani village, Umunya in the Oyi Local Government Area for alleged theft, conspiracy, and extortion.

According to the PPRO, the suspects used social media to seduce their unsuspecting male victims into fictitious relationships before taking them into a room and engaging them in foreplay.

He claimed that when other gang members barged into the room, Obianuju Nduba foreplayed with the victim.

“They take naked photos and films of the victims, which they then use as leverage to demand that they send them large sums of money.”

If the victims don’t agree, “they typically threaten to post the nude images and films on social media and also deprive the individual of his personal effects,” the man said.

Ikenga stated that after the investigation is complete, the case will be brought before the court.

The CP further cautioned the populace to be on the lookout for criminal elements who have turned to social media for their business.