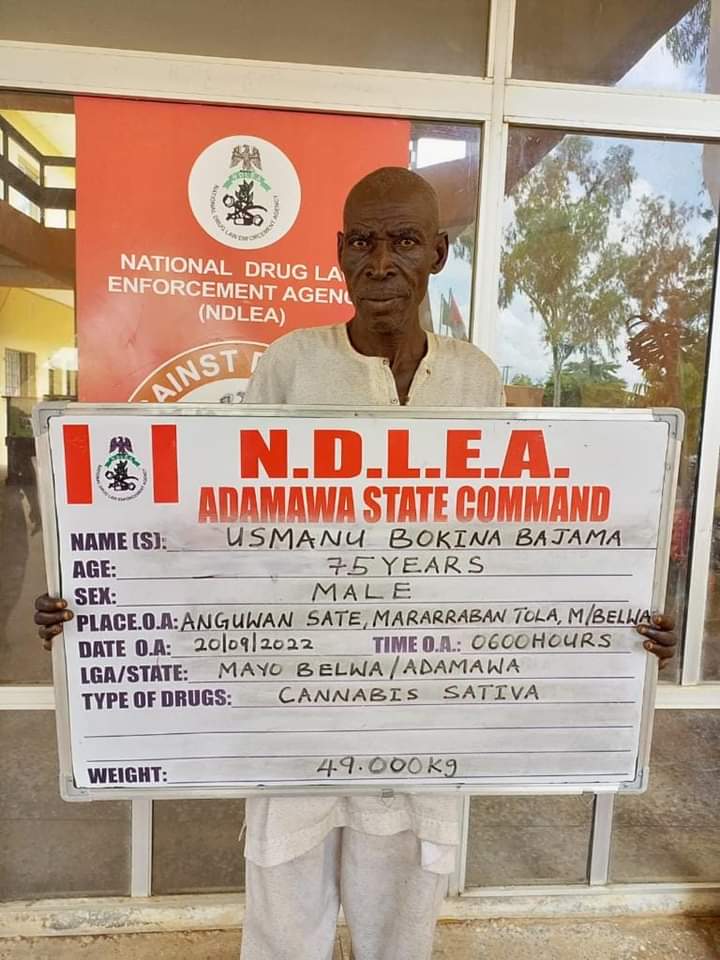 …..21 others arrested over tons of illicit drugs seized in 6 states

…As NDLEA intercepts 1,001,387 bottles/caps of Akuskura, opioids; destroys over 10 hectares of cannabis farms in Edo, Adamawa

A 75-year-old grandpa, Usman Bokina Bajama (alias Clemen) tops the list of 22 suspects arrested in operations across seven states by operatives of the National Drug Law Enforcement Agency, NDLEA, during which One Million One Thousand Three Hundred and Eighty Seven (1,001,387) bottles/capsules of banned new psychoactive substance, Akuskura and tramadol as well as 2,536 kilograms of cannabis were seized and over 10 hectares of its farms destroyed in Edo and Adamawa.

The septuagenarian was arrested in the early hours of Tuesday 20th September at Anguwan Sate, Mararraban Tola, Mayo Belwa council area of Adamawa where he had a cannabis plantation from where 49kg of the illicit substance was recovered.

In Kwara, at least 19,878 bottles of the banned new psychoactive substance, Akuskura were intercepted by NDLEA operatives along Ilorin-Jebba highway on Wednesday 21st September and two suspects: Oladokun Oluwaseun, 49, and Ibrahim Jimoh, 27, arrested. They claimed the consignment packed in 35 jumbo sacks was loaded in Ibadan, Oyo state, and meant for distribution in Jos, Plateau state. Earlier, two suspects: Ukoro Ifeanyi, 46, and Idowu Toyosi, 20, were arrested with 2,290 capsules of tramadol and 100 bottles of codeine-based syrup at Mararaba park, Ilorin. The drugs were brought in from Onitsha, Anambra state. 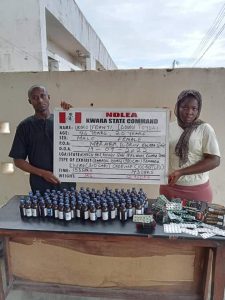 In Lagos, NDLEA operatives acting on credible intelligence intercepted a Volvo truck loaded with 2,146 kilograms of cannabis at Sangotedo area of Ajah and three suspects: Abdulazeez Rasheed; Afeez Raheem and Moshood Suleiman arrested. At least, 979,119 capsules of expired pregabalin weighing 733kg were recovered from Musbahu Ya’u, 28, and five others at Dansarai area of Kano, while in Enugu, 197.8kg cannabis was recovered in a store at new market, Enugu on Tuesday 20th Sept. In the same vein, 117.7kg of the psychoactive substance was intercepted along Okene-Abuja expressway in a truck coming from Lagos to Abuja.

Meanwhile, anti-narcotic officers at the Murtala Muhammed International Airport, MMIA, Ikeja Lagos have arrested two freight agents over attempts to smuggle 26.20kg cannabis concealed in cereal packs through the SAHCO shed for export to Dubai, UAE. The consignment was abandoned at the shed before the airport security transferred it to NDLEA.

Further investigation by the Agency led to the arrest of Olatunbosun Damilola Abimbola, 34, who works at Ashadox Logistics Services, a cargo company on Friday 23rd Sept. He confessed to the crime but stated that he acted on the instructions of his Managing Director, Oloyede Shakiru Abiola, who was promptly arrested. The 40-year-old indigene of Ibadan West Local Government Area of Oyo State stated that due to the strict security measures put in place by the NDLEA, he was forced to abandon the cargo to avoid being detected.

Chairman/Chief Executive of NDLEA, Brig. Gen. Mohamed Buba Marwa (Retd) commended the officers and men of Adamawa, Kwara, Lagos, Kano, Enugu, Kogi, Edo and MMIA Commands for their resilience, while charging them and others across the country to remain vigilant and committed to the collective goal of saving Nigeria from the drug scourge.