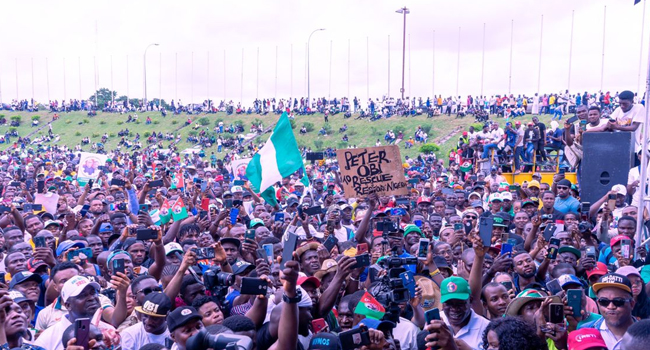 The Labour Party and its supporters may hold the # Obidatti23 Forward Rally scheduled for October 1, according to the Federal High Court in Lagos, but they are not allowed to congregate at the Lekki toll gate.

The Lagos State Police Commissioner, Abiodun Alabi, and Inspector General of Police Usman Baba were both given instructions by the court to make sure the ruling was followed.

The order was made today by Justice Daniel Osiagor in response to a motion for injunction filed by ten plaintiffs. The plaintiffs are requesting the court to prevent the LP, its presidential candidate Peter Obi, his running mate Datti Baba-Ahmed, one Julius Abure, and their supporters from holding the rally, among other things.

The court further ruled that although Obi’s supporters are not permitted to stop at the Lekki toll gate, they are permitted to move through the area in order to approach Falomo Bridge and other locations.

However, the defendants’ preliminary objection, which sought to prevent the court from hearing the motion on the grounds that it lacked jurisdiction, could not be taken into consideration because all parties to the lawsuit had not been served.

The court postponed the hearing on the main lawsuit until November 4, 2022.

In the substantive suit, the plaintiffs are arguing among other things that a repeat or celebration of the “infamous” EndSARS protest of 2020 under the political guise of “#Obidatti23 Forward Ever Rally” will cause a breakdown of peace and will result in post-traumatic stress disorder for them and the public.