A British football agent has been released on bail after being arrested as part of a blackmail investigation following an email threat allegedly made to former Chelsea director Marina Granovskaia, according to reports.

The Times reported that the agent, who cannot be identified for legal reasons, sent the message to Granovskaia while she was working on Todd Boehly’s takeover of the club. Granovskaia left Stamford Bridge in June, shortly after it was completed.

The agent allegedly threatened Granovskaia and wanted £300,000 for his involvement in a high-profile deal. The police are now looking into the matter.

According to the report, part of the message stated,”If Chelsea don’t pay it then the debt will be on you to pay. I am done trying to be nice to you.”

It was reported that the agent cited a similar threat to one he had made to another football figure. “I will make you pay for the way you have been,’ he wrote in his email. ‘That’s not a threat . . . it’s a promise. If Chelsea don’t pay it’s on you . . . see you when I see you.

“I will give you the chance to make things correct if you apologise for your behaviour towards me. If you don’t then I promise you I will make you pay for the way you have been with me on a personal and business level. This is not a threat so take it how you want. This is a promise that I give to anybody who f***s/tries to f*** me over in anything in life.” 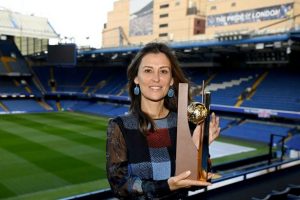 The Russian-Canadian business executive was one of several figures to depart the club following Boehly’s takeover. Former club chairman Bruce Buck also left, along with chief executive Guy Laurence, as part of an overhaul at Stamford Bridge.