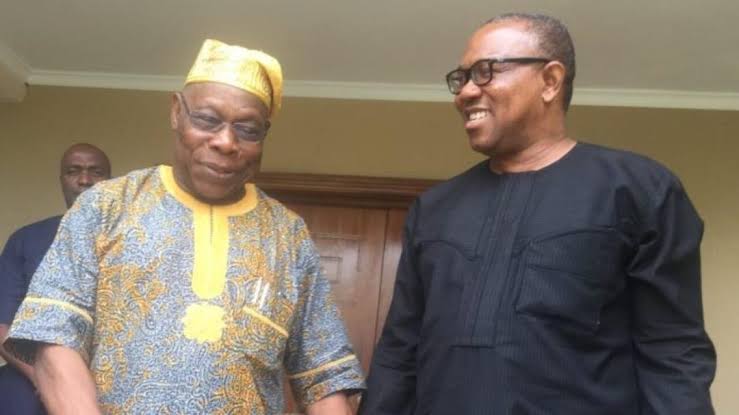 On Sunday, former president Olusegun Obasanjo backed Peter Obi, the front-runner for the Labour Party, saying he had an advantage over the other contenders in terms of education, discipline, vigor, and character.

Therefore, the wise man urged Nigerians to support the LP candidate in the presidential election on February 25.

The front-runners in the poll to succeed President Muhammadu Buhari are the presidential candidates of the APC, Bola Tinubu; PDP, Atiku Abubakar; LP, Obi; and the New Nigeria Peoples Party, Rabiu Kwankwaso.

In the 2023 New Year message signed by the former President and made available to newsmen by his aide, Kehinde Akinyemi, Obasanjo described the last seven years of the Buhari regime as horrible and hell on earth for most Nigerians.

The letter partly read, “The last seven and a half years have no doubt been eventful and stressful years for many Nigerians. We have moved from frying pan to fire and from the mountain top to the valley. Our leaders have done their best, but their best had turned out to be not the best for Nigeria and Nigerians at home and abroad. For most Nigerians, it was hell on earth.

“Those of us who are alive should thank God for His mercies, brace ourselves for the remaining few months of this administration and pray and work very hard for an immediate better future – a future of liberation, restoration and great hope and expectation.’’

Appraising the suitability of the presidential standard bearers, Obasanjo accused them of deceit, adding that some of them had been trumpeting what was not realistic in a desperate bid to win the election.

The ex-president expressed anguish over the terrible state of the nation, stressing that the presidential candidates did not realise that Nigeria had been dragged down well below the level it was when he assumed office in 1999.

He admitted that Nigeria was in very bad shape and was tottering on the verge of collapse and break-up when he took office, but the nation, he added, was not faced with the current level of pervasive and mind-numbing insecurity, rudderless leadership, mismanagement of diversity and pervasive corruption and bad economic policies, which he said had resulted in extremes of poverty and massive unemployment and galloping inflation.

In endorsing the ex-Anambra State governor, the elder statesman said a suitable presidential candidate must have “a track record of ability and performance; a vision that is authentic, honest and realistic; character and attributes of a lady and a gentleman who are children of God and obedient to God.”

Hinting that Obi possessed the attributes and attitudes necessary to successfully directing the affairs of Nigeria at a time like this, Obasanjo expressed support for Obi and called on Nigerian youths to vote for him.

The former president stated, “None of the contestants is a saint but when one compares their character, antecedents, their understanding, knowledge, discipline, and vitality that they can bring to bear and the great efforts required to stay focused on the job, particularly looking at where the country is today and with the experience on the job that I personally had, Peter Obi as a mentee has an edge.

“Others like all of us have what they can collectively contribute to the new dispensation to liberation, restoration and salvaging of Nigeria. One other important point to make about Peter is that he is a needle with thread attached to it from North and South and he may not get lost.

“In other words, he has people who can pull his ears, if and when necessary. He has a young and able running mate with a clean track record of achievement both in public and private life.”

While expressing respect for all the presidential candidates whom he said claimed to be his mentees, Obasanjo buttressed his choice of Obi with the argument that the aspiration to lead the country should be a collective quest and not a personal or selfish ambition.

He described Obi as his mentee, stressing that the former Anambra State governor had an edge in the 2023 elections.

In a veiled reference to Tinubu and Atiku’s stance that it was their turn to lead the country and on their claims that they have paid their dues, the former leader said, “Let me say straight away that ‘Emi Lokan’ (It’s my turn) and ‘I have paid my dues’ are one and the same thing and are wrong attitude and mentality for the leadership of Nigeria now.

“They cannot form the new pedestal to reinvent and to invest in a new Nigeria based on an All-Nigeria Government for the liberation and restoration of Nigeria. Such a government must have representation from all sectors of our national life – public, private, civil society, professional, labour, employers, and the diaspora. The solution should be in ‘we’ and ‘us’ and not in ‘me’ and ‘I’.’’

Taking a jibe at the APC and PDP presidential candidates who are septuagenarian, respectively, the Owu chief further contended that both men may not be able to provide the vigour, energy, agility, dynamism and outreach that the job of leadership of Nigeria at the very top required.

“The vigour, energy, agility, dynamism and outreach that the job of leadership of Nigeria requires at the very top may not be provided as a septuagenarian or older. I know that from personal experience. And it is glaring out of our current experiences. Otherwise, we will be fed with, “The President says” and we will neither see nor hear him directly as we should,’’ he warned.

Obasanjo, who led the nation between 1999 and 2007 said Nigerians have a unique opportunity to position the nation on the right trajectory by voting for the right person, adding that those preaching division, segregation, and separation simply want to use the nation’s diversity for their selfish interest, describing them as the enemies of the nation.

The former military head of state appealed to Nigerian youths to take charge of their future by deploying their large population to reposition the nation on the path of change and progress in the next polls.

“I appeal to the young Nigerians to stop inheriting other people’s prejudices and enemies. Make your own friends and stop inheriting your father’s enemies. Let’s stop criminaliszing and demonizing one another on the basis of the civil war on which we are all wrong. And let’s praise and thank God for preserving the oneness of Nigeria,’’ he appealed.