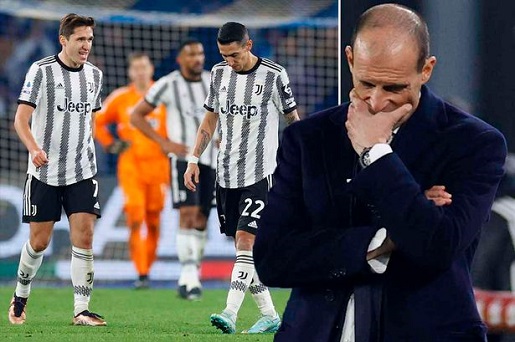 The national football federation (FIGC) announced on Friday that Juventus has been docked 15 points for the current season due to alleged financial irregularities and fraudulent accounting by an Italian football court looking into its transfer activities.

Juventus were third in Serie A with 20 games left to play in the current campaign, 10 points behind leaders Napoli.

Juventus will drop from third to 10th in the Serie A table as a result of the FIGC decision, leaving them outside of the berths for European participation.

The decision is more severe than the nine-point reduction that a football prosecutor had asked for earlier on Friday during a hearing over Juventus and various other teams’ handling of player exchange deals.

Tottenham’s transfer chief Fabio Paratici has been handed a 30-month ban from Italian football for his involvement.

The two-and-a-half-year ban for Juve’s former sporting director Paratici, who is now managing director of football at Spurs, includes a request for an extension to cover UEFA and FIFA activities.

The court ruled that former Juventus chairman Andrea Agnelli is to be banned from holding office in Italian football for 24 months.

The club’s CEO Maurizio Arrivabene has also been handed a two-year ban, while former vice-chairman Pavel Nedved has been given an eight-month suspension.

The prosecutor of the case alleged that the Juventus had misrepresented losses in the period between 2018 and 2020, particularly regarding the amount ascribed to player sales.

The whole board resigned in November, leading to various media outlets claiming the unanimous decision came as a result of involvement in the Prisma investigation.