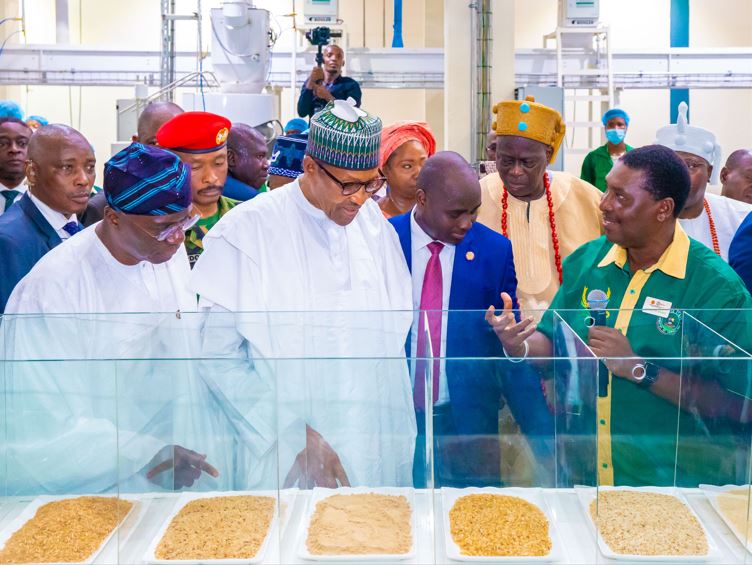 The President told Governor Sanwo-Olu in a simple sentence “You are doing Well.”

President Buhari spoke during the inauguration of the Lagos Rice Mill in Imota, the largest rice mill in Sub Saharan Africa and the fourth largest in the world.

The President who toured the facility, saw the rice pyramid and also watched the last part of the bagging process, which is the sealing, said he was impressed by what he saw at the Lagos Rice Mill, Imota.

President Buhari was taken round the factory and warehouse, where the rice production is being carried out by Governor Sanwo-Olu, Commissioner for Agriculture, Ms. Abisola Olusanya; Special Adviser to the Governor on Rice Mill Initiative, Dr Oluwarotimi Fashola and some members of the State Executive Council and traditional rulers. 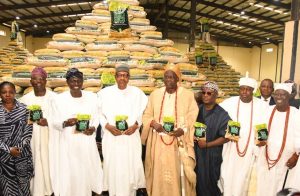 Speaking during the tour of the facility, Governor Sanwo-Olu said Eko Rice, which is proudly Nigeria, is the best in town.

“Mr. President, this is the result of your rice revolution. This rice is called Eko Rice, proudly Nigeria. It is the best in town now,” he said.

Governor Sanwo-Olu while addressing people after the inauguration of the Lagos Rice Mill by President Buhari, said Lagos is ready to support rice revolution and food revolution in Nigeria.

He said: “The President is really delighted to be here to commission the largest rice mill in the entire sub Saharan Africa and one of the largest in the world, the Lagos Rice Mill in Imota. 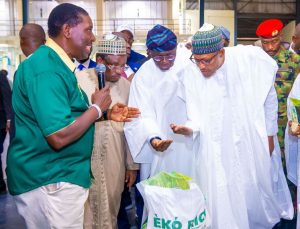 “It is being done because of the agricultural revolution of Mr President, who when he started his government, said Nigerians should grow what they eat and they should eat what they grow.

“We are happy that Lagos is a testament of that. With 2.8million bags of 50kg rice per annum, Lagos is ready to support the rice revolution and the food revolution in Nigeria.

“The Lagos Rice Mill will create close to 250,000 direct and indirect jobs. We want to thank the local community of Imota, Ikorodu. We want to thank all of you that have waited patiently. Mr President is indeed excited that you have birthed another first in Nigeria and in sub Saharan Africa.”

“In my opinion, the capacity of farmers to grow rice amidst negative impact of climate change and insecurity should be the next front burner focus.”