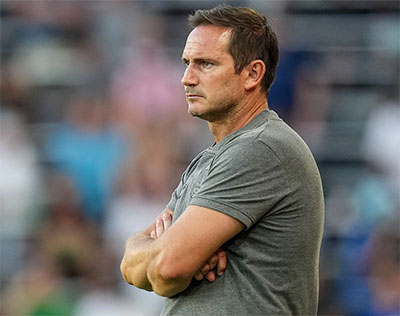 Frank Lampard is set to learn his fate on Monday, with Everton ready to end his 357-day reign as manager.

The 44-year-old met with Farhad Moshiri, the club’s owner, after Saturday’s 2-0 loss at West Ham after a run of 11 defeats in Everton’s last 14 games.

Everton is in danger of being relegated for the first time since 1951, thus the club is looking for instant solutions given that they have big games against Arsenal and Liverpool coming up.

Former Chelsea boss spoke with owner Moshiri and chairman Bill Kenwright over the weekend, along with director of football Kevin Thelwell, and has accepted things will change after Saturday’s 2-0 defeat at West Ham.

Moshiri abdicated responsibility over Lampard’s future as he left the London Stadium,saying that ‘It’s not my decision’ on managers.

Everton’s players have been given time off and are not due to return to their Finch Farm training complex until on Tuesday afternoon though it remains to be seen who will oversee the planned session, if — as expected — Lampard and his staff are jettisoned.

Former Burnley manager, Sean Dyche, has been heavily linked in recent weeks — Moshiri sounded him out in October 2017 when Ronald Koeman left — but the former Burnley boss has not been approached and is not high on the list of candidates.

Former Wolves and Tottenham boss Nuno Espirito Santo was interviewed after Ancelotti’s departure in June 2021 but he is now at Al-Ittihad in Saudi Arabia with a £7m release clause.