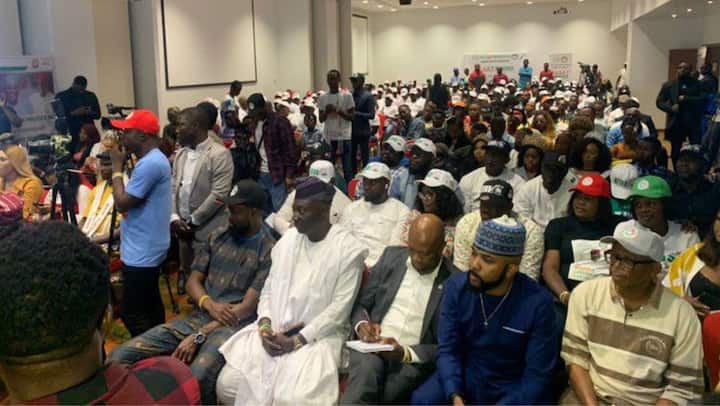 By Aishat Momoh. O.Alhaji Atiku Abubakar, the PDP presidential candidate, and Dr. Olajide Adediran (Jandor), the PDP candidate for governor of Lagos State, both received support from the Youths in Politics (YIP) of Nigeria on Saturday.

At the ceremony in Lagos, the group, working with the PDP New Generation group, also supported several of the party’s candidates for seats in the Lagos State House of Assembly and House of Representatives.

The President of YIP, Mr Micheal Nwabufo, said: “We are endorsing these people because we have seen that they have shown good leadership qualities.

“They have shown that they have the leadership capacity and competence to rule and put smiles on the faces of the people as president, governor or members of the legislature.

“We are proud to endorse these people. We are going to look at other credible candidates and endorse later across party lines.

“We shall continue to look at the leadership qualities and capacity to endorse candidates that can take up the mantle of leadership regardless of the party they belong to nationwide,” Nwabufo said.

According to him, the YIP will, however, not leave the endorsed candidates alone after winning elections in 2023 but will be part of their government to monitor them and work with them.

He said that Abubakar had been able to invest in the country, saying “this man is ready to rule. Right now, he is the only man qualified to rule this nation now among other candidates.

“We are not playing outside politics anymore. We have decided to be involved because the system belongs to us right now.

“We are there to make sure there are changes in governance. We are going to rule with Atiku Abubakar and make sure that he delivers to the country,” Nwabufo, popularly called Mike Premium said.

Prince Mohammed Suleiman, PDP National Youth Leader, while speaking, said that the endorsement of PDP candidates remained a strong signal to all Nigerians that the youths were behind the main opposition party and believed in Abubakar and others.

“The youths must put all hands on deck to rescue and rebuild this country and the only man for the job is Alhaji Atiku Abubakar because he is full of experience and has solutions to many of the challenges facing the nation, ” Suleiman said.

Meanwhile, Mr Audu Mahmood, the Director General, PDP New Generation, described the endorsement as timely, saying that the youths had come to understand that Abubakar was the only candidates that could help the youths in 2023.

Also speaking, Amb. Abass Aliyu, Special Assistant on Youth Affairs to Atiku Abubakar said: “This is testimony that the former vice president is indeed the next president of Nigeria because when you talk about winning election, you talk about youths and women.

“What I saw here is very heartwarming, we can see the turnout, enthusiasm, love and passion for Atiku.”

In his remarks, the Lagos PDP governorship candidate, Adediran, who appreciated the endorsement, urged the youths to canvass for votes at the grassroots for PDP to bring in a breathe of fresh air to the people..

Adediran, popularly known as Jandor’ said: “If we are deliberate about 2023, then we will get things right. If truly we want to make that change happen, then we must must rise up.

We have to be deliberate about 2023. We must use our strength to convince others. This election is for us to win.

“We have everything to deliver all our candidates from the president to NASS and the state assembly.”

He said that Abubakar would provide leadership for all sections of the society as a president and a nationalist, hence the need to support him.

Adediran said that youths could turn things around exploiting their population, assuring that Abubakar would create opportunity for the youths.

The youth group also, presented Certificate of Credence Endorsement to Abubakar, Adediran, Wellington and other endorsed candidates, in recognition of their competence as agents of change in building the Nigeria of everyone’s dream.