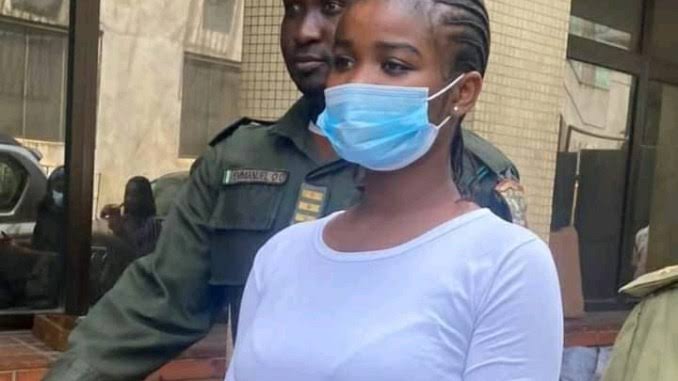 The murder trial against 21-year-old Unilag undergraduate, Chidinma Ojukwu, the prime suspect in the on-going murder case of Super TV boss, Micheal Usifo Ataga, was stalled on Wednesday, as the prosecuting team was yet to respond to the written address of the defense.

On the last adjourned date, Justice Yetunde Adesanya, of the Lagos State High Court, Tafawa Balewa Square (TBS), had fixed January 11, 2023, for the adoption of written addresses of the prosecution and defense in the trial-within-trial.

This is to ascertain if the defendant (Chidinma), voluntarily made a statement at the Police station when she was arrested.

Meanwhile, on November 17, 2022, Chidinma testified before the court in her trial-within-trial as the first witness.

While giving her testimony, she mentioned how one Assistant Superintendent of Police, Olusegun Bamidele,and another Olufunke Madeyinlo, had made her sign a statement written by the police against her will.

She continued that ASP Bamidele told her to memorize and narrate what he wrote to the Commissioner of Police after he allegedly tore her own original statement which she wrote.

Chidinma said that, she was slapped by one of the policemen, while forcing her to sign the statement.

Chidinma is on trial for allegedly killing Ataga. Along with her sister, Chioma Egbuchu, and another person named Adedapo Quadri, she is also accused of stealing and forging documents.

The trial-within-trial was scheduled to be adopted at the case’s resumed hearing, but it was postponed after Lagos State Prosecuting Attorney T. E. Onilade informed the court that the defendant had only served them with the address last week.

Onilade said,” The first defendant’s address was served on us during the festive period. The address which was dated December 23, 2022, was served on the Attorney General’s office on December 30, and we only received service last week, but we have not replied.”

The address was dated December 23, 2022, according to Chidinma’s attorney, O. Okemezie, who also provided a Motion on Notice in support of the written address and a seven-paragraph affidavit.

Justice Adesanya did postpone the case to February 13 in order to allow for the adoption of written addresses.

The three defendants were arraigned on October 12, 2021, on a nine-count charge preferred against them by Lagos State Government.

Ojukwu and Quadri are facing the first to eight counts bordering on conspiracy, murder, stabbing, forgery, making of bank statements, and stealing.

The third defendant, Egbuchu, is facing the ninth count – stealing of iPhone 7 belonging to the late Ataga.

Ojukwu and Quadri are alleged to have conspired and murdered Ataga on June 15, 2021, by stabbing him several times with a knife in the neck and chest.

They were also accused of committing forgery by procuring and making bank account statements purported to have been made by the deceased.