The Premier League have postponed this weekend’s round of fixtures following the Queen Elizabeth’s death on Thursday as the country now in a state of national mourning.

“To honour her extraordinary life and contribution to the nation, and as a mark of respect, this weekend’s Premier League match round will be postponed, including Monday evening’s game.”

Richard Masters, Premier League Chief Executive, said: “We and our clubs would like to pay tribute to Her Majesty’s long and unwavering service to our country.

“Further updates regarding Premier League fixtures during the period of mourning will be provided in due course.” 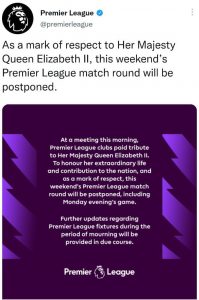