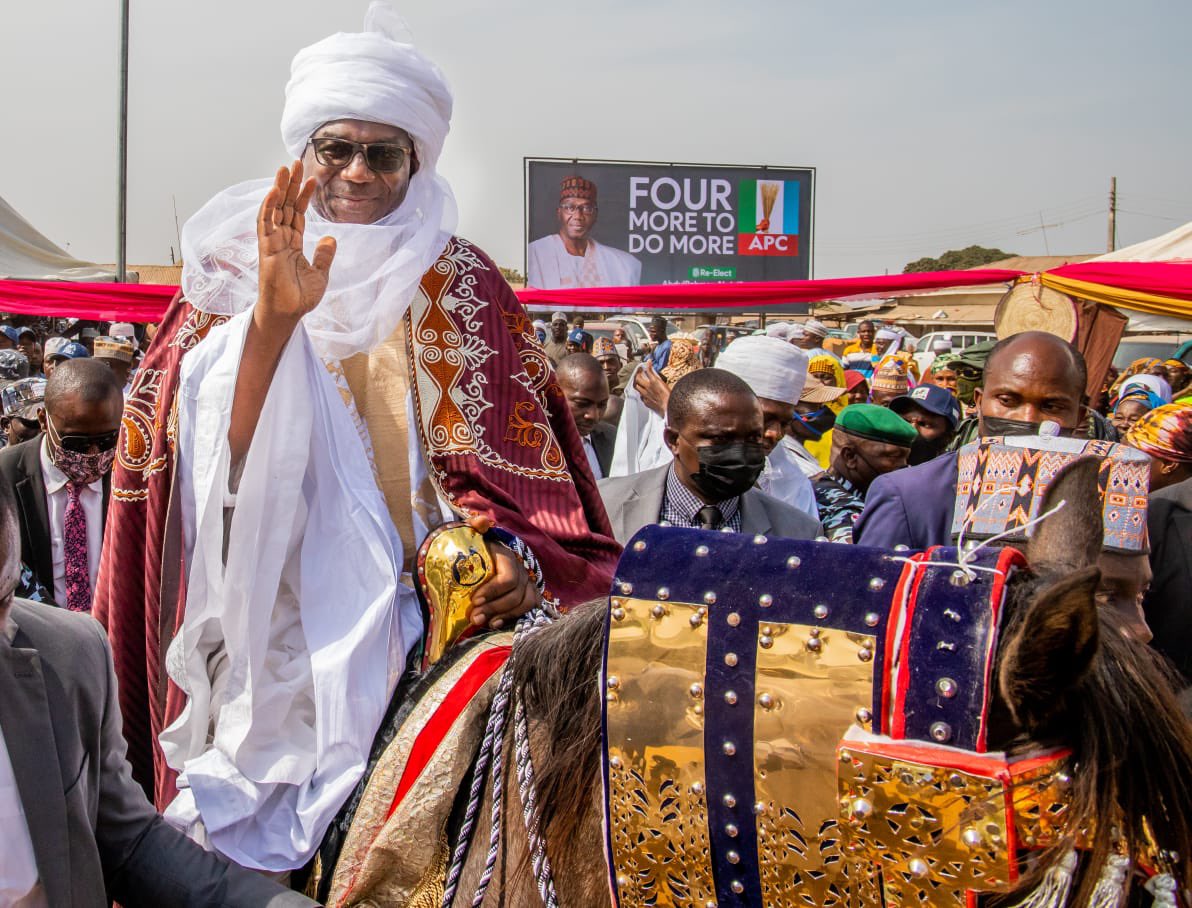 Kwara State Governor, Abdulrahman Abdulrazaq has said the next APC government under Asiwaju Bola Ahmed Tinubu will dredge the River Niger to curtail the annual flooding and deaths in its tributary states like Kwara, Niger, and others.

The Governor therefore asked the people of Lafiagi in Edu local government of the state to vote for Tinubu at the 2023 polls, saying his victory will benefit the northern and other parts of the state.

In a press release signed by Rafiu Ajakaye, he highlighted that the Governor listed the dredging of the River Niger as one of the top projects the state government will pursue with Asiwaju when he emerges as President. He said Kwara will also press for federal interventions on many road and other capital projects within the state, including the Chikanda-Kosubosu road project and the upgrading of the Lafiagi Technical College. The Governor was speaking in Lafiagi where he was turbaned the Sadaukin Lafiagi by the Emir of Lafiagi Alhaji Muhammed Kudu Kawu. The turbaning held as the Emir celebrated his first year anniversary on the throne.

“A top priority we want our Presidential candidate Asiwaju Ahmed Tinubu to pay attention to when he comes to power in 2023 is the dredging of River Niger. It will be a priority because we have seen the destruction caused by the annual flood,” the Governor said.

The Governor was turbaned alongside Senator Sadiq Umar (Kwara North) who got the title of Dan-Amar of the Lafiagi Emirate. He promised to consolidate on the gains of the administration in the Emirate by paying more attention to their welfare and infrastructural needs.

“We will not relent in paying due respect and attention to this Emirate, as we do to others. As you know, and as the Emir has said in his speech, we have made a lot of progress in this Emirate. In 2019, the situation was very sad in terms of education, human capital development; general infrastructure across board. It is now a different story,” he said.

“Edu local government remains one of the strongest and progressive local governments in Nigeria, essentially for hosting two sugar refinery projects, and our own investment in Gbugbu International market.”

He said efforts are being made by his administration and Senator Sadiq Umar to ensure that the construction of Chikanda-Kosubosu road project see the light of the day, explaining that the matter has already been raised at the Federal Executive Council. AbdulRazaq, who was impressed by the level of development and peace in Lafiagi, attributed the feats to the brilliant efforts of the Emir and the Emirate Advisory Council he had constituted describing the Emir as highly intelligent. He also congratulated the monarch on the first year anniversary on the throne and wished him more rewarding years.

At the event were Senator Sadiq Umar; cabinet members and top government officials; first class traditional rulers from Kwara North and South; and thousands people of Lafiagi town and environs. Emir of Lafiagi, Alhaji Muhammad Kudu Kawu, for his part, said they deemed it fit to confer the Governor with such title in appreciation of his government’s strides in the Emirate.

He said the Emirate has witnessed significant progress during the present administration and promised that the people of the Lafiagi will reward him with their vote in the coming election.

“Most inspiring for me is the support I have received by those that have adopted Lafiagi as their second home. And in order to show our appreciation I put to them (Lafiagi Emirate Advisory Council) the need for us to recognise them today for the services and support they have rendered to our community,” the Emir said.

“Those who are honoured today with the conferment of traditional titles have, since my ascension to the throne, shown uncommon love for our community, especially in initiating and siting various developmental projects in our domain. Leading them is His Excellency the Governor of Kwara State, who has transformed our local market at Gbugbu into an international one. “The government also constructed the Lafiagi Township road, and more importantly that it secured approval of the federal government to construct a highway from Lafiagi through Tsonga, Bode Saadu to Kaiama under the Tax Exception programme,” he added.