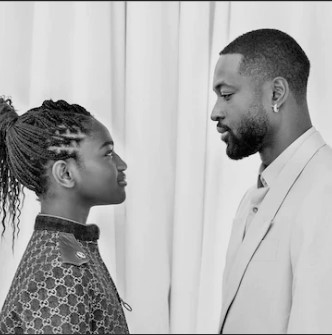 Dwyane Wade has officially requested a name change for his daughter, Zaya with the court. The former NBA Player filed paperwork in Los Angeles on Thursday.

Wade’s still has full authority to make decisions on his daughter’s behalf and notified his ex-wife Siohvaughn Funches, the girl’s mother, of the legal action as a courtesy.

Back in 2011 the Retired NBA Star was awarded sole custody and control of Zaya and  her brother Zaire.

A Chicago court granted the star athlete such control after successfully proving that the kids’ biological mother, Siohvaughn Funches, was unstable.

Siohvaughn later told the press that she believed Dwyane’s status as a celebrity heavily influenced the decision. Dwyane, however, praied the outcome.

Back in 2019,  Zaya Wade came out as the part the LGBTQ+ community which later received criticism.

“As blessed as it is for my daughter to have parents who can support her, I’m still afraid every moment she leaves the house,” he shared during a recent interview with CNN’s Poppy Harlow at the TIME 100 Summit in New York City.

“And not just because of gun violence,” Wade continued. “But because of the way people perceive her in this world.”

Zaya Wade has gone by her new moniker for more than a year. Dwyane Wade filing paperwork to make things official, however, marks a significant step in his daughter’s journey.