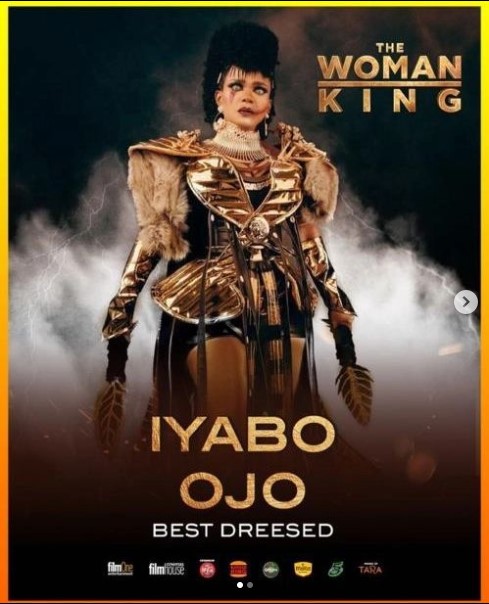 Over the weekend, Nigeria’s top film and television studio, Film One Entertainment, gathered the entertainment industry’s A-List to celebrate the premiere of The Woman King.

The Woman King is a 2022 American historical epic film about the Agojie, an all-female warrior unit that guarded the West African Kingdom of Dahomey in the nineteenth century.

Celebrities such as Iyabo Ojo, Uti Nwachukwu, BBNaija’s Saga, Diana and Khalid, Jide Kene, Hawa Magaji, and Daara Oruwayi were among those who attended the exclusive event to celebrate the release of the film.

Guests gathered at the Film House Cinemas, Lekki, for the exclusive event with the theme Afro Warriors.

The actress to her instagram page to express her gratitude for the award and also gave a special shout-out to the organizers of the show as well as her stylist, Toyin Lawani and everyone else on her glam team

…… It was indeed a collective effort what is what doing is worth doing well
.
@tiannahsplacempire: congratulations my darling, the undefeated king of fashion, just 2 days & you killed the look as usual

@segun_wealth: the one & only lens lord thank you so.so much, even though you were a bit strong, you came through….

@fredmakeover: you’re one of the best makeup artist we have right now in Nigeria & they’re not ready
.
@tgoldhair: no one does it better ……… queen of hairstyling
.
My famz & loved once thank you for your love & constant support, once i collect the money, I’m giving 10 famz 10k each… just drop acct if you need 10k
.
LOVE.YOU ALL …….”