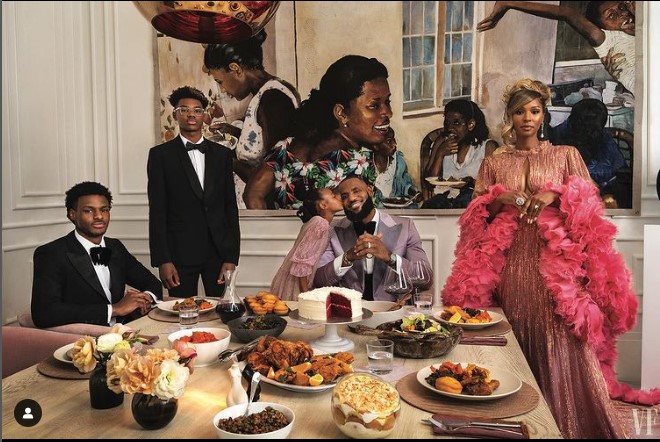 NBA {National Basketball Association} player and Los Angeles Lakers star, LeBron James along with his family appear on the cover of Vanity Fair.

Savannah Brinson and LeBron James met in 2002, when they were students at nearby high schools in Ohio, and just as LeBron became a national phenomenon. His early expectations were astounding, but he went on to outperform them.

In 2013, he married his wife Savannah , who made him a proud father of three children namely Bronny, Bryce and Zhuri.

As he prepares to enter his 20th season in the NBA {National Basketball Association}. His family, with its ever-expanding cultural footprint, has taken on increasingly prominent roles in the landscape he has reshaped.

Savannah’s parents, Jennifer and JK, including LeBron’s mother, Gloria, joined them as they gathered at their Los Angeles home to commemorate, in their first photo shoot as a family. 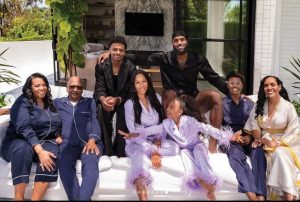 Bronny, a guard for Sierra Canyon’s high school powerhouse basketball team, who turns 18 in October, says it’s about “getting to a place to start making decisions about his career and where he wants to go in his life.”

All the things Zhuri features on her page have included segments on baking, yoga, and painting.

Bryce, 15, whom Savannah affectionately refers to as “the mystery of the family” because he can go in any direction, despite being a highly touted basketball prospect himself.

Savannah has watched her children grow into their own dynamics, as she said, “It’s not something we’ve pushed or told them that they had to do, or anything like that. It just happened.”

LeBron James signed with the Los Angeles Lakers in 2018, and his arrival marked the culmination of how he and the wider world of professional sports had become entangled with the entertainment industry.

“They look like the Rockefellers of 2023,” Gloria observed as she surveyed the dinner table. She has a valid point. While the James family has not pursued Kardashian-levels of onscreen confessional, Zhuri’s comfort with an audience and the breathless anticipation surrounding her brothers’ careers have resulted in the family becoming a public institution.