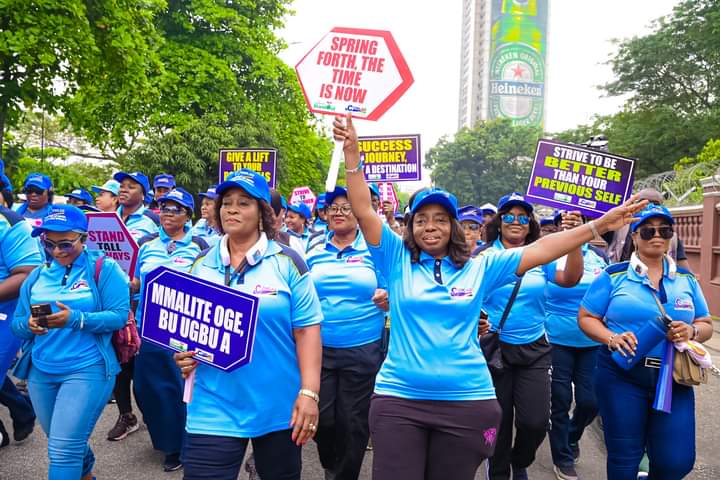 Lagos State First Lady and Chairman of the Committee of Wives of Lagos State Officials (COWLSO), Dr Ibijoke Sanwo-Olu on Saturday led an awareness walk on the forthcoming 22nd National Women’s Conference (NWC) of the Committee, saying it is time for women to spring forth and stand out.

The Conference, with the theme: “Spring Forth, Stand Out,” will be held from 18th to 20th October 2022 at the Convention Centre, Eko Hotels and Suites, Victoria Island, Lagos.

She said the theme was specifically aimed at encouraging women to understand the need to stand out and be exceptional in all their endeavours.

“In 2021, we had “Awake” as our theme and this year, our theme is “Spring Forth, Stand Out.” It is a continuation of what we started last year. We want our women to spring forth, wake up from their slumber and now stand out.

The First Lady, who embarked on the awareness walk with COWLSO members from Odunlami Street, Lagos Island to Lagos House, Marina, seized the opportunity to sensitize residents on the collection of Permanent Voters Card (PVCs), among others, while also paying glowing tribute to the founding mothers of COWLSO.

“As we all know, we have been doing this for the past 22 years. COWLSO was founded by Mrs Obafunmilayo Mobolaji-Johnson, the wife of the First Military Governor of Lagos State. At some point, it was docile but was revived in 1999 by the Distinguished Senator Oluremi Tinubu during the administration of our National Leader as Governor of Lagos State, Asiwaju Bola Ahmed Tinubu.

“Senator Oluremi Tinubu also initiated the National Women’s Conference of COWLSO in 2000 and for the past 22 years, we have been doing this annually. We are creating this awareness so that people can come to the conference to learn, unlearn and relearn new things that are happening and can be beneficial,” Sanwo-Olu said.

On the expected guests, she said Nigeria’s First Lady, Dr. (Mrs.) Aisha Muhammadu Buhari will serve as the Mother of the day and would declare the Conference Open, while His Excellency, Governor Nyesom Wike of Rivers State is the Special Guest of Honour at the Opening Ceremony.