Anthony Joshua lost his rematch against Oleksandr Usyk, however the official judges’ scoring shows that he was still in the lead after nine rounds.

In Saudi Arabia on Saturday night, Joshua tried unsuccessfully to reclaim the WBO, WBA, and IBF heavyweight titles. The former heavyweight world champion performed significantly better than he did in his initial setback at Tottenham last September, although losing by split decision.

American referee Glenn Feldman gave the lead to the two-time world champion with a score of 115–113, while Viktor Fesechko and Steve Gray both gave the nod to Usyk with scores of 116–112 and 115–113, respectively. 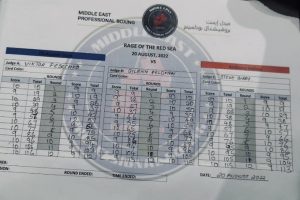 Joshua’s best spell of the fight came in the ninth round when he put Usyk under pressure with a flurry of powerful body shots, after which he was adjudged to have been on top.

After nine rounds, the official scorecard, which boxing journalist Dan Rafael was able to secure, shows Joshua with scores of 85-86, 87-84, and 86-85.

Feldman was the only one of the three judges to predict the Londoner would win round 12 and it also shows Joshua leading 5-1 after six rounds in his eyes. But only Gray predicted Joshua would win the eighth round.