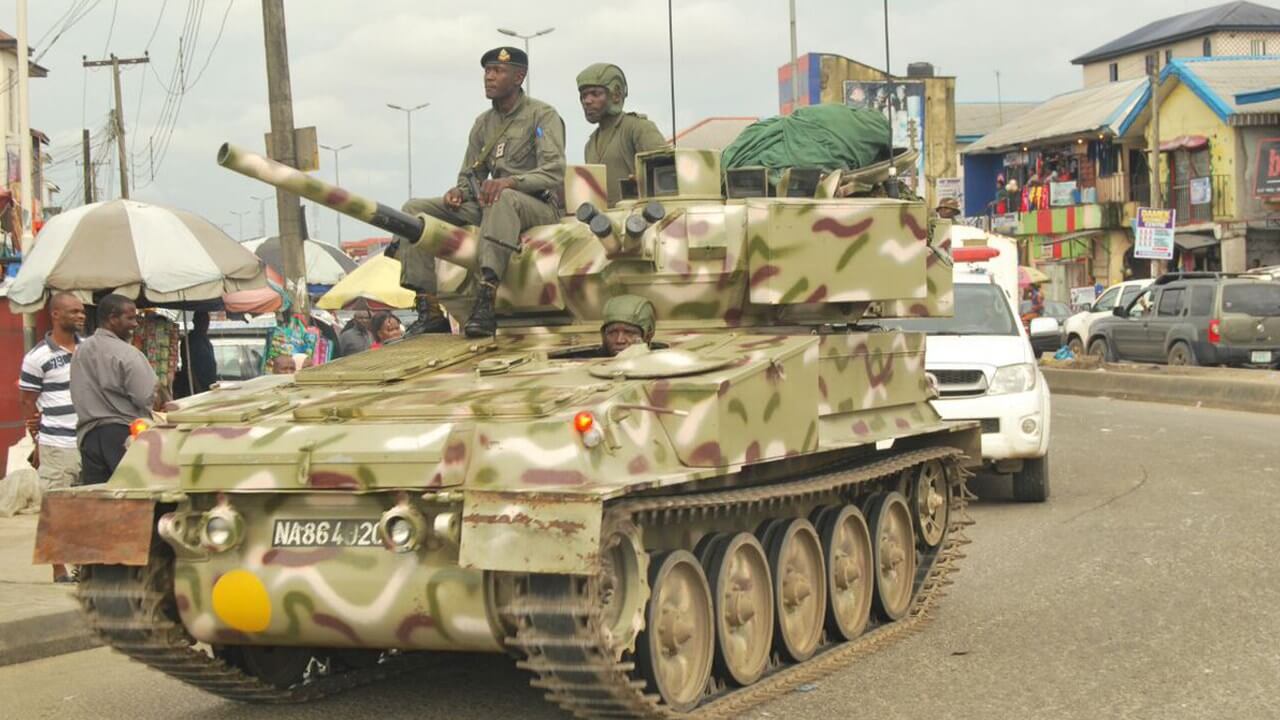 Facebook
Twitter
Pinterest
LinkedIn
Read Time:3 Minute, 34 Second
By Adeola Abdullah
The Nigerian Army has said that it will not succumb to intimidation by the Independent People of Biafra (IPOB) organisation and “one so called International Society for Civil Liberty and Rule of Law ( Intersociety)”.
This was contained in a press release signed by the Director of Army Public Relations, Brigadier General Onyema Nwachukwu; he said “the attention of the Nigerian Army (NA) has been drawn to a libelous, spurious and derogatory narrative credited to one so called International Society for Civil Liberty and Rule of Law ( Intersociety), alleging that the Nigerian military, especially the NA is working with armed herdsmen/bandits to terrorize the Eastern part of the country and Benue state.
“A cursory look at the content reveals a business-as-usual pattern of propaganda by the well known, paid jobbers and fifth columnists christened INTERSOCIETY, who after several failed attempts, still unrepentantly and shamelessly continues to dissipate its energy in mudslinging, all in a futile effort to drag the image and reputation of the NA in the mud, while promoting irredentists, lawless and outlawed organizations.
“Unfortunately for these mischief makers, the highly patriotic and untiring efforts of the Nigerian Army to neutrally defend the territorial integrity and sovereignty of Nigeria is visible enough and boldly seen by all and have received international accolades.
“It is on this unmistakable pedigree, that the NA wishes to dismiss these concoctions and evil propaganda peddled and served to unsuspecting members of the public by INTERSOCIETY, covertly sponsored by IPOB/ESN, with the singular purpose of destabilizing our dear nation.
“It is on record, that the NA conducted and will still conduct series of Exercises not only in the South Eastern states, but across all the states of the Federation, which has reasonably reduced criminality especially in the South East, where Intersociety’s cohorts like IPOB and ESN could no longer enjoy freedom of action to unleash death and mayhem on Ndigbo and other Nigerians, who do not support their evil bid.
“Intersociety’s unprofessional posture is crystal clear and evident in its biased and unbalanced submissions and reportage, as it has never openly condemned the atrocious activities of IPOB/ ESN, for which it is fronting. InterSociety would rather turn a blind eye, when these groups illegally deny law abiding citizens their rights to freedom of movement and association through their illegal sit-at-home order, the attack on military, police, paramilitary personnel and other security agencies, the attack and callous beheading of Nigerians including ndigbo, the destruction of government facilities and infrastructure, amongst myriads of other nefarious activities.
“However, the NA through the conduct of Exercises such as PYTHON DANCE, GOLDEN DAWN, ENDURING PEACE AND STILL WATERS have effectively checkmated and drastically reduced their criminal activities and other sundry crimes in South Eastern Nigeria, while alongside the exercises, fostering excellent Civil-Military Relations through series of Civil Military Cooperation (CIMIC) activities heralding the conduct of these exercises. The recently concluded Nigerian Army Day Celebration (NADCEL) 2022 held in Owerri, Imo state saw the Nigerian Army bringing succour to the South Easterners through organized medical outreaches, renovation of schools, sinking of boreholes and road repairs. These are totally in dissonance with the image being concocted of the NA by the glorified Civil Society Organization (Intersociety) and their collaborators.
“The Nigerian Army therefore, remains a professional institution that is resolved to protect the territorial integrity of Nigeria and will never be distracted by mischief makers, who find pleasure in blackmailing and defaming the institution to gain cheap publicity and satisfy the interest of fifth columnists, in their unrelenting effort to destabilize the nation.
“The Nigerian Army is not by this reaction denying the presence of black sheep in its fold, just like in any other organization or institution. This, the Army is very mindful of and actively monitoring and effectively handling within the provisions of extant laws.
“We call on INTERSOCIETY to channel its energy like the Nigerian Army into nation building, rather than tearing our nation apart. Nigeria remains our nation and no other.
“The Nigerian Army will continue to count on the support of all Nigerians and the international community, as it selflessly continues to carry out its constitutional mandate to defend Nigeria and restore sanity and peace in all troubled parts of the country.”