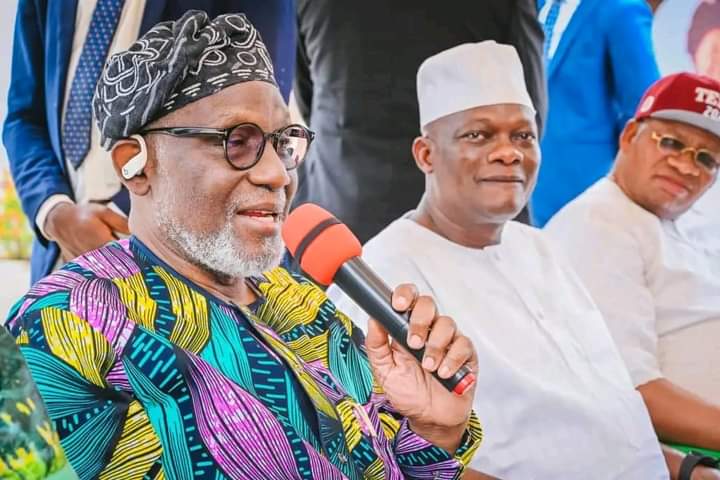 Governor Akeredolu, who said it is not easy to clock 90 years, noted that his mother has left enduring legacies.

The Governor spoke at his late mother’s Kopindogba residence in Ibadan where he received the Aare Musulumi of Yoruba, Edo and Delta States, Alhaji Dahud Akinola and the All Progressives Congress (APC) Governorship candidate in Oyo State, Senator Teslim Folarin.

Aare Akinola who led other Muslims delegation on the condolence visit, described Lady Evangelist Grace Akeredolu (JP) as a true mother who would be missed by all.

He prayed God to give the Governor and his siblings the fortitude to bear the irreplaceable loss.

Aare Akinola stressed that Lady Evangelist Akeredolu is a woman of substance who left indelible marks in the sand of history.

According to him, God has been so good to the nonagenarian who lived well and was blessed with successful children.

The APC Governorship candidate in Oyo State, Senator Teslim Folarin led some of his supporters and members of the party to condole Governor Akeredolu.

He congratulated the Governor for surviving his mother, adding that it is the joy of everyone to survive their old ones.

The Governorship hopeful said:”We are here to congratulate our boss for surviving his mother. You are one of Governors that our people have tremendous respect for. You speak your mind and stand up for the Yoruba race.”

Welcoming Aare Akinola and his team, Governor Akeredolu thanked them for identifying with him.

He said the good legacy left behind by his mother will continue to live after her.

Governor Akeredolu described his late mother as a true mother who did not joke with proper upbringing of her children.

While welcome Senator Folarin and his supporters, Governor Akeredolu appreciated them for visiting him and his siblings.

He charged the Governorship candidate and his supporters to work assiduously to ensure the victory of the APC in the state.