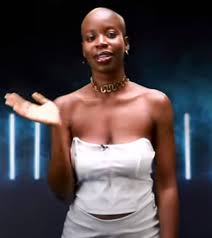 BBNaija housemate, Ossy Alsyson Ausu popularly known as Allyson has been evicted from the Level up Season on Sunday during the live eviction show in Lagos.

This was made known by Ebuka, few minutes after he spoke with Chomzy, one of the evicted housemates from last Sunday’s live eviction Show.

Allyson joined the league of Evicted housemates after she was nominated for possible eviction by groovy during the week.

She’s one of the six housemates that was nominated last week.