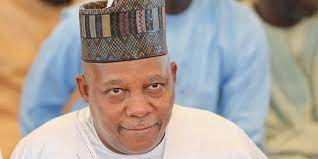 Senator Kashim Shettima, who is running for vice president, was feted by the ruling All Progressives Congress on Friday. The party described him as a shining light.

The honor comes after the former governor of Borno State celebrated his 56th birthday on Friday, September 2.

He claims that Shettima is a fearless, brave, selfless, clever, and devoted leader who guided his people through a trying time while resisting the pressure of Boko Haram while serving as governor.

In a separate statement released on Friday and signed by the APC’s deputy national publicity secretary, Murtala Ajaka, the party praised Shettima and said that even as he celebrated his 56th birthday, he was the party’s shining star.

Ajaka noted that Shettima’s selection as Tinubu’s running mate had marked a significant turning point in the political history of the nation.

The statement reads: “The ticket symbolises the party’s determination to be a leading light among political parties in Africa, just like the celebrant himself (Shettima) who has been a shining light as governor, senator and vice president-to-be in 2023.

“He was able to make his mark despite the challenges of insecurity in the North-East,” adding that “crisis is the true test of a man’s ability and Shettima proved his mettle.”

While recalling his laudable achievements as governor of Borno State, especially in education and infrastructure, the APC spokesman said the party was proud of the principles that threw up Shettima as a running mate to Tinubu.

He said, “As a party, the principles of competence, innovation, compassion, integrity, fairness, and adherence to excellence, among others, that determined the choice of Senator Kashim Shettima as our running mate is something APC is proud of.”