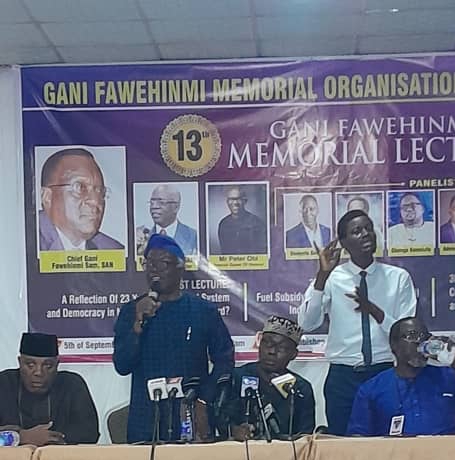 Falana stated this on Monday, during the 13th Memorial Lecture and Social Night Tribute in Chief Gani Fawehinmi’s honor, who was a leading advocate for human rights.

Falana, who presided over the lecture, expressed regret over the ongoing discussion around oil theft and claimed that the government could have halted the problem with basic technology.

Speaking about the situation yesterday, Falana claimed that in order to continue stealing the country’s resources, the administration has refused to deploy cutting-edge technology to track the daily gasoline supply.

“We say it with profound respect that it is a shame that Nigeria is the oil producing country in the world that imports fuel and other petroleum products.

“Secondly, we want to say this publicly that the NNPC acquired a software seven years ago to monitor and track every tanker loading fuel in Nigeria and that software was installed with about 50 billion Naira.

“Why the government has refused to be modern is this: if they install the technology, there won’t be stealing.

“So we are saying here today that the NNPC must disclose to Nigerians why the software acquired seven years ago has been disabled by the government so that tankers can take out fuel.

“Fuel is taken out by tankers not by Okadas. So you will need at least 2000 tankers to take out the quantity of fuel that they are saying is smuggled out of the country and that is not possible.

“There is an international shipping company. Every ship that takes fuel from anywhere in the world is monitored. The way our oil is stolen. The point of taking out oil, the ship is loaded and the criminal taking out the fuel will determine how many litres of fuel is being smuggled then collect money.

“Between January 2011 and Feb 2014, it was discovered that crude oil left Nigeria to Philadelphia port alone and not recorded in Nigeria was 62 million barrels valued at 12.7 billion Dollars. Your National Assembly people, including the people from Lagos, are not asking questions.

“So when we leave here, they must be sensible in each of their constituencies. You must ask questions why they are making this fraud. If we can start with Lagos, we can do that all over the country.”