This is part of the Annual Anniversary and 2022 Give-Back to Government College Ibadan (GCI) students.

The presentation took place during the Prize Giving/Valedictory Service of the 2021/2022 graduating students at the Lalekan Are Hall, GCI premises, Apata, Ibadan.

The current School Principal, Mr. Peter Awodiran, while giving his speech, congratulated all the graduands and awardees for their accomplishments.

He also thanked the GCIOBA 1985 set, for sponsoring this year’s Valedictory Service and Prize Giving Day.

He said, “it is important to encourage other students still under our tutelage and looking forward to a day like this to make hard work and diligence their watchword. For those of you that have come too in just concluded promotion exam, accept my congratulation as you receive prizes and awards for your performance and we implore you to keep it up.

“The school management is grateful to the GCIOBA 1985 set for providing your shoulder for us to see further than others by Co-Sponsoring this year’s Valedictory and Prize Giving Day. You are highly appreciated.”

In his speech, the guest speaker, Apostle Yinka Adegbuyi, spoke on the topic “Success in Life – No limit”. 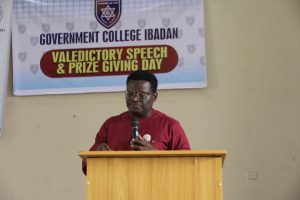 Apostle Adegbuyi celebrated all 264 members of the graduating class for how incredibly they performed in their studies while challenging them to keep the pride of GCI where it belonged and also to follow the footsteps of the school’s Alumni who have gone ahead to place the institute on the world map.

He therefore advised the graduating students not to be full of themselves and also not to relent in fighting for what they want.

“Do not relent in fighting for everything or making attempts as you have been empowered in GCI. Your best shot is never enough until life is no or the feat is achieved. None other is better than you and your weakest point should be their strongest. Success in life can only be achieved by running strategically, winning is a gift earned by the best fighter, it is never handed out for free.

“Go boys and succeed in life, leave your marks in the sands of life and footprints in the annals of mankind! Do not fear or be dismayed at the weakest obstruction but strive for mastery. Be eager to acquire knowledge and quick to demonstrate it to the good of mankind.”

“Resist violence as it bears not many good products, it rather diminishes your social goodwill. I pray for divine protection over your lives and desire that you all will live till old age having emptied all of God’s talents before the great call to eternity!” He said.

Earlier, the Chairman of the occasion; Mr. Wale Salami, who is also an old boy of the school and a member of the GCIOBA ’85 Set, encouraged the students to take good advantage of the opportunity of good education.

Salami said that education and all of the extracurricular activities are designed to prepare the youngsters for the realities of the larger world and lay a foundation for their greatness.

The best graduating Student, Asala Oreoluwa, thanked the school principal and teachers for the role they played in the lives students while they were in school. He also, thanked the GCIOBA, for their support and the act of philanthropy.

While Speaking with Hotjist.com in an interview, he advised the other students to always stay focused while they take their studies seriously.

While advising his fellow graduands, he said, “My friends and brothers, I have no doubt that we would do well but I ask that we don’t take too long to start doing well. The day is going and soon it would be night, let’s make the best of it, carrying everything we’ve learned with us as a guide.”

Oreoluwa thanked the GCIOBA ’85 Set for the recognition and cash prize of N50,000 awarded to him.

Awards and gifts were also presented to several other outstanding students in different subjects and classes.

In his closing remarks, the Set Chairman of the ’85 Set announced that they will be paying the examination fees for all external exams of the best twenty students academically in the present SS3 class.

Also, the finals of the Inter-House Football competition, sponsored by the GCIOBA ’85 Set, took place at the school’s main field. Contesting for the trophy and cash prize of N75,000 was Grier House and Field House.

Grier House won the highly entertaining match by two goals to nil with both goals scored by Abdul-Lateef Farouq in the first half.

Abdul-Lateef was also voted as the best player of the tournament. 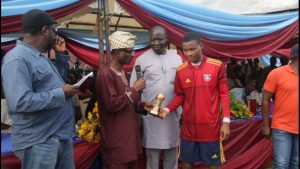 The trophy for the winning team and also the cash prize were presented by the Chairman of the occasion; an old boy of the school and the immediate past Commissioner for Youth and Sports in the State; Abayomi Oke. 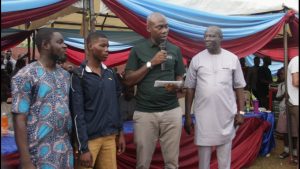 The GCIOBA ’85 Set will continue its Anniversary celebrations on Saturday, October 1st with a novelty football match, annual general meeting and thereafter hold a luncheon and awards ceremony.