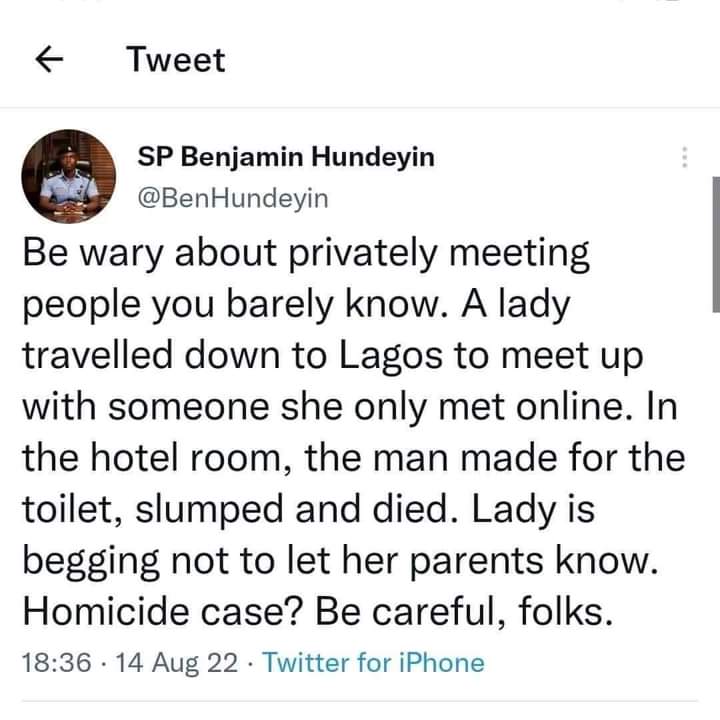 Fear has gripped a lady (names witheld) as her male companion who she just met online dies in a hotel room in Lagos.

The man, Abdulwaheed Lamidi, aged 55, was reported to have slumped and died when he went to the toilet.

He stated that the Lady had travelled down to Lagos on Saturday to meet Lamidi (now deceased), who she only met online adding that in the hotel room, the man went to the toilet, where he slumped and died.

The duo had lodged into City International Motel, Council Bus-Stop, at Ikotun, a suburb of Lagos.

The lovers were said to have spent the night together in a room.

However, things took another turn on Sunday morning.

A source said the lovers were in the room when the girlfriend suddenly ran out to call for help.

He added that when some motel workers rushed into the room, they found Lamidi lying motionless on the ground.

“The girl said the man wanted to enter the toilet but slumped and fell on the ground. A doctor that works in a hospital close to the motel was called and when the doctor got to the room, he certified the man dead.

“The girl said she came to Lagos to meet the man as he promised to marry her; she came with some property and had the intention of moving into his house to be his live-in lover. Instead of going to the man’s house, they went to the hotel and they were in the room when the girl ran out to call for help because the man slumped.

“So, when people rushed into the room, they found him lying unconscious on the ground. The incident happened around 8.40am on Sunday but the girl arrived from another state on Saturday. The girl said she met the man online and that they had been chatting,” the source added.

The corpse was taken to a mortuary, while the woman was arrested for interrogation.

However, Hundeyin warned the public against private meetings with strangers.

“A lady travelled down to Lagos to meet with someone she only met online. In the hotel room, the man made for the toilet slumped and died.”

“Lady is begging not to let her parents know. Homicide case? Be careful, folks.” he said.

Meanwhile, the Lady in question is begging the police not to tell her parents about the unfortunate incident.

Hundeyin said, “We have contacted the deceased’s family and they have shown up. They are applying to just get their corpse. They said they were not interested in any criminal investigation but the command is still considering their application through its legal department.