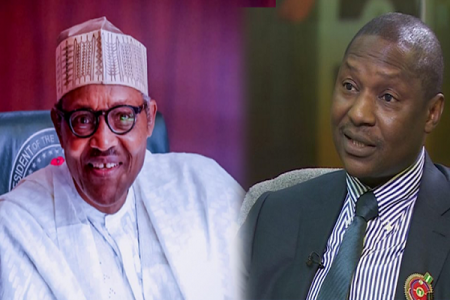 A seven-member panel led by Justice Musa Dattijo Mohammed granted the application for joinder filed by Rivers officials on Thursday, despite the fact that plaintiffs’ lawyer, Lateef Fagbemi (SAN), and lawyer to the National Assembly (earlier listed as the sole defendant), Kayode Ajulo, were not opposed.

Fagbemi had intended to oppose the application but altered his mind after learning that it could postpone the main suit’s hearing.

The Court ordered that all relevant processes be filed and exchanged by Wednesday next week, and deferred the hearing until Thursday.

Emmanuel Ukala (SAN), the lawyer for the Rivers AG and Speaker (now the 2nd and 3rd defendants), stated his clients believed they needed to be appointed parties in the action since the outcome would affect them in some way.

The Rivers Attorney General and Speaker claimed in their supporting affidavit that the suit is about the legitimacy and constitutionality of the provisions of section 84(12) of the Electoral Act 2022, which apply throughout the federation of Nigeria, including the Rivers State of Nigeria.

“Any decision rendered by this court in respect of the subject matter of this suit will undoubtedly affect the legal rights of the Rivers State House of Assembly and impinge upon its legislative powers to make laws in addition to but not inconsistent with section 84(12) of the Electoral Act 2022 enacted by the National Assembly and applicable in Rivers State, and will undoubtedly affect the scope of its authority to make laws as conferred on it by Section 7 and item E. 12 of the Concurrence Act 2022 (as amended).

“ State is constitutionally bound to be governed democratically in accordance with the letters and spirit of the Constitution.

“The applicants/parties seeking to be joined are persons or entities bound by the provisions of the Constitution of the Federal Republic of Nigeria 1999 as amended and the Electoral Act 2022 and therefore proper or necessary parties entitled to be joined as defendants to this suit so as to be heard in the exercise of their constitutional right of fair hearing in respect of the subject matter of this suit whose outcome is likely to affect their legal rights and obligations.”

The National Assembly has asked the court to dismiss the case, claiming that it was brought in the incorrect way.

The federal legislative house claims that the “court lacks the required jurisdiction to hear and consider this complaint” in a notice of preliminary objection filed by its counsel, Kayode Ajulo, and that the lawsuit was filed in “flagrant violation of Section 1(1)(A) of the Supreme Court Act.”

It went on to say that “the first plaintiff (Mr. Buhari) has decisively completed his constitutional duty and, as such, there is no foundation to attempt to undo what he has done in the exercise of his powers.”

“The Supreme Court’s original jurisdiction cannot be used to change any provision of any law legally passed by the National Assembly in the exercise of the legislative powers conferred on it by the constitution.”