While Rihanna’s maternity leave is over, we can now see how she and Rocky will dress their son. 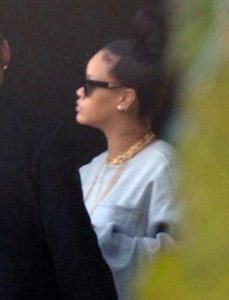 Rocky, but photographers have already caught photographs of the 34-year-old leaving her West Hollywood home, dressed as elegantly as ever – though her ensemble is far less exposing than the ones she’s been sporting in recent months.

According to sources, the Barbadian singer went out with her bodyguard in Los Angeles on Thursday (May 19th), dressed in baggy black slacks and a cozy grey hoodie. The mother of a child had her hair up in a bun, and accessorized with gold chains and a pair of sunglasses.

Impressively enough, it looks as though RiRi is wearing heels with her outfit – something she also did consistently throughout her pregnancy; it’s no easy feat for some women on a normal day,

but she managed to do it with ease while carrying another passenger, and now, while in recovery from giving birth.

Though we know that the “Breakin’ Dishes” songstress welcomed her son on Friday, May 13th, we still don’t know what she and Rocky have named the young boy, or if he resembles his mother or father more.

It will likely only be a matter of time until we find out more about the superstar in training, and with such fashionable parents, he’s sure to have a wardrobe that will be the envy of all his friends,

just like Rocky rapped about on “Fashion Killa” – “She ball until she fall, that means she shop until she drop / And Versace, got a lot, but she may never wear it / But she save it so our babies will be flyer than their parents.”

In other news, after it was announced that Rihanna had given birth, countless celebrities wished her congratulations, including her ex, Chris Brown