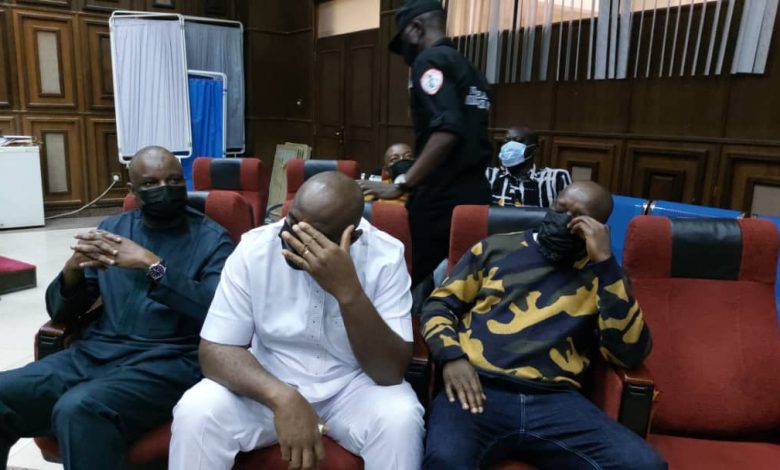 In a judgment issued by trial Justice Emeka Nite, the court found Umeibe and Ezenwanne guilty of counts 5, 6, and 7 of the drug trafficking accusations brought against them by the National Drug Law Enforcement Agency, NDLEA.

The couple, who were seized at Enugu’s Akanu Ibiam International Airport while attempting to bring cocaine into the country, were arraigned in court on March 7 alongside DCP Kyari and four other police officers: ACP Sunday J. Ubia, Insp. Simon Agirigba, Insp. John Nuhu, and ASP Bawa James.

Both Umeibe and Ezenwanne pleaded guilty to the narcotics trafficking accusation against them at their arraignment.

Though Justice Nwite initially deferred the case to review the facts of the case against them, the NDLEA notified the court on Tuesday that it had entered into a plea bargain deal with the two defendants through the Director of its Legal Department, Mr. Sunday Joseph.

As a result, Mr. Joseph persuaded the court to accept the provisions of the plea bargain agreement as the court’s ruling against the defendants.

Justice Nwite found the two defendants guilty and sentenced them to two years in prison on each of the three counts against them.

However, because the two defendants were regretful, the court decided that their sentences would run consecutively, beginning on the day they were detained.

The court also ruled that the defendants’ international passports should be forfeited in compliance with Section 30 of the NDLEA Act, Cap M30, Laws of the Federation of Nigeria.

The court approved Umeibe and Ezenwanne to appear as witnesses in the trial of DCP Kyari and the other accused police officers, while also ordering the NDLEA to secure their safety in any correctional facility of their choosing, in accordance with the plea bargain deal.

It ordered the NDLEA to keep a close eye on the two defendants while they are in prison to ensure that they do not engage in any drug-related criminal activities.

According to Justice Nwite, DCP Kyari and his men will face a full-fledged trial on July 18, 19, and 20, as well as a hearing on their new bail plea.

In the accusation marked FHC/ABJ/57/2022, the NDLEA said that Kyari, who previously led the Police Intelligence Response Team, IRT, unlawfully interfered with 21.25 kilos of cocaine seized from the two captured drug traffickers, while also accusing them of trading in 17.55 kilograms of cocaine.

The alleged crime was committed between January 19 and 25, 2022, at the office of the Inspector-General of Police (IGP) IRT, Abuja, in collaboration with one ASP John Umoru (now on the run), in violation of section 14(b) of the NDLEA Act, CAP N30 Laws of the Federation of Nigeria 2004.

Furthermore, Kyari was accused of attempting to bribe a senior NDLEA officer with $61,400.00 at an Abuja restaurant to prevent the testing of some of the cocaine seized from the two arrested drug dealers.