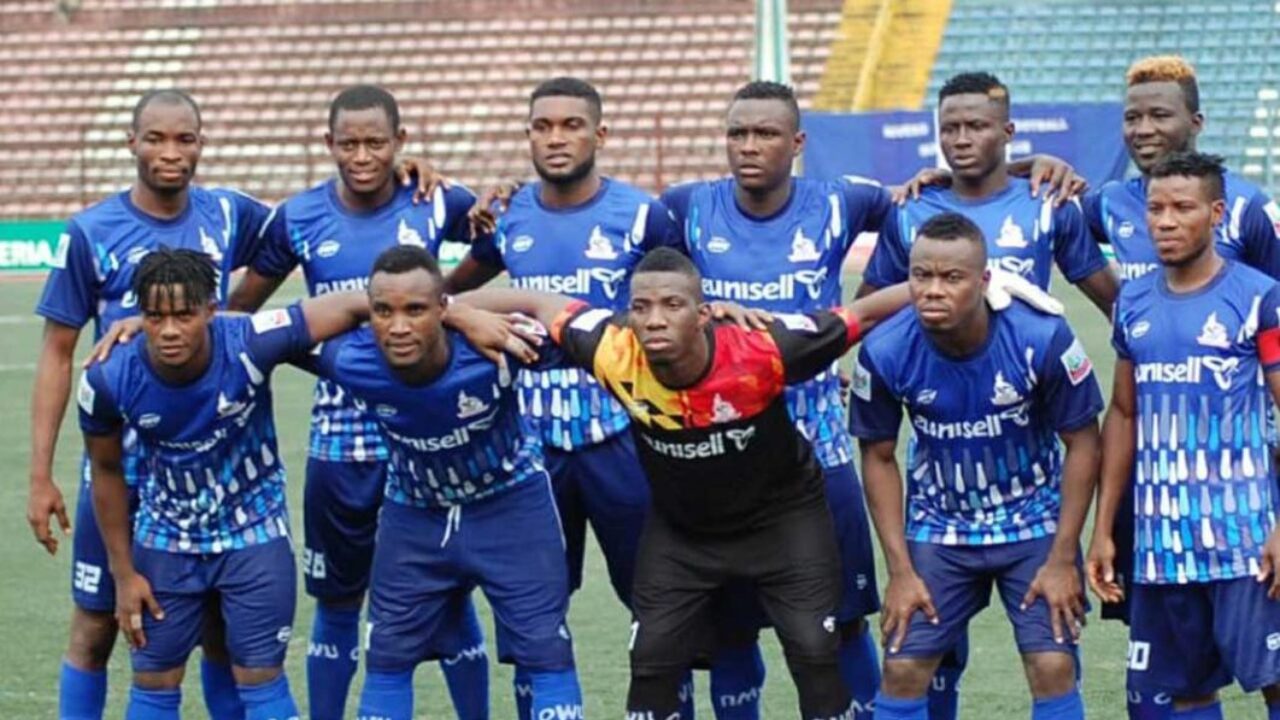 With three fixtures to end the season, Rivers United claimed their first league title since their formation in 2016 while the battle for the third spot will go for another week after the major gladiators for the position all stumbled as the remainder of the Matchday 35 fixtures of the Nigeria Professional Football League were decided on Sunday.
Earlier on Saturday, Rivers United became the league champions for the 2021-22 season after nearest rivals, Plateau United collapsed to a 2-1 defeat at the Godswill Akpabio Stadium, Uyo against deposed champions, Akwa United.
The Pride of Rivers were presented with a guard of honour by their hosts, Nasarawa United before the start of the game but they were beaten 2-1 in Jos after a late spot-kick decided the tie.
Sunday Okereke put the Solid Miners in front in the fifth minute but Sikiru Olatunbosun cut short the joy of their host when he bagged the equaliser 10 minutes from full time. Nasarawa United managed to get the winning goal through Tochukwu Michael who notched his 11th goal of the season from the penalty spot in the 90th minute.
The home win takes the Solid Miners to the 10th spot with 47 points, four points away from the drop zone while Rivers United’s 71 points tally gave them an unassailable 10 points lead to second-placed Plateau United with three games to the season’s end.
They will now try to chase after Dolphins FC’s 73 points record points haul for a season which was set in 2011.
The race for the second spot is not yet a done deal though Plateau United still hold the ace with a seven-point gap between them and third-placed Remo Stars.
The former league champions need one more win from their remaining matches to guarantee the second spot.
The quest for the third and final spot for continental club competition from the league may go down to the wire after the four major contenders all suffered hitches in their pursuit of the CAF Confederation Cup ticket.
Remo Stars who are currently holding on to the third spot with 53 points narrowly lost 3-2 to Katsina United at the Muhammadu Dikko Stadium, Katsina. Tosin Omoyele was at the double for the Changi Boys but Sikiru Alimi and Alameen Adegbite drew the Sky Blue Stars level before a late Emmanuel Matthew strike settled the contest.
Enugu Rangers who are fourth on the log with 52 points failed to glitter in Kano as they fell 1-0 to Kano Pillars courtesy of Rabiu Ali’s effort from the spot in the 51st minute while Enyimba who occupy the fifth spot, with 52 points, also suffered a major setback in their quest to annexe the third spot after a goalless home draw against bogey team, Heartland FC in the latest Oriental derby.
The Naze Millionaires thus extended their unbeaten run against the People’s Elephant to 10 games. The Owerri side have not lost to Enyimba since 2015 and they have boosted their survival chances with the solitary point even though they are still 18th on the table with 41 points.
Kwara United were humiliated 4-0 by Niger Tornadoes while Sunshine Stars and Akwa United recorded home wins over MFM and Plateau United. The Church Boys’ 2-1 loss to the Owena Whales in Akure all but confirmed their place in the lower league next season.
Gombe United defeated Wikki Tourists 2-1 to remain in the top 10 but Shooting Stars dragged themselves close to the relegation zone after they let slip a two-goal lead to draw 2-2 against Abia Warriors in Ibadan.
Emmanuel Lucky and Dare Olatunji had put the Oluyole Warriors in the driver’s seat in the 30th and 35th minutes with the former coming from the spot. But Imama Amapakabo wards’ never say die spirit earned them the priceless point through Valentine Odoh and Godwin Obaje’s goals in the 41st and 70th minutes. Odoh scored his 12th goal of the season in the process. 3SC are now 16th on the table with 44 points and just a point off the drop zone while Abia Warriors are a spot below them with 43 points.
At the Aper Aku Stadium, Makurdi, Lobi Stars made it two successive wins after a laboured 1-0 victory over Dakkada FC. Chinonso Okonkwo who netted the match-winner in their away win over Niger Tornadoes on Wednesday was on the score sheet again scoring in the 11th minute to make it his second straight goal in the last two games.
With the win, Lobi Stars have zoomed out of the drop zone and are now perched comfortably in the 12th spot with 46 points. They have a three points buffer ahead of the relegation zone but Dakkada is in the 19th spot with 40 points.
NPFL Matchday 35 Results
Sunshine Stars 2-1 MFM
Enyimba 0-0 Heartland
Katsina Utd 3-2 Remo Stars
Lobi Stars 1-0 Dakkada
Gombe United 2-1 Wikki Tourists
3SC 2-2 Abia Warriors
Kano Pillars 1-0 Rangers
Nasarawa United 2-1 Rivers United
Niger Tornadoes 4-0 Kwara United
Akwa United 2-1 Plateau United