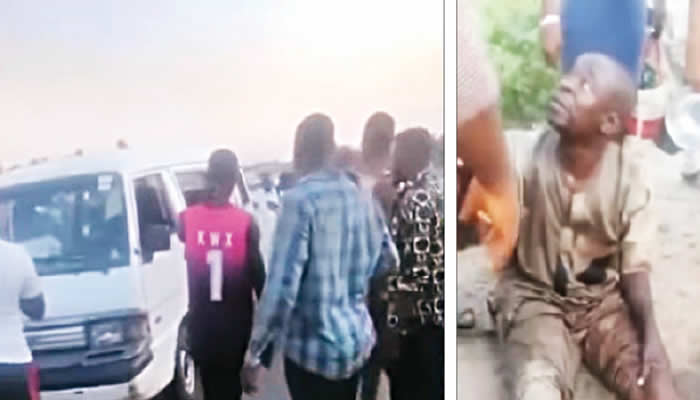 Officers of the Ogun State Police Command fought against suspected kidnappers during an attack on travelers plying the Lagos-Ibadan Expressway.

It was reported that on Tuesday, the gunmen were dressed in military camouflage, when they attempted to abduct passengers in an 18-seater bus.

The vehicle was reported to be heading to Lagos from Ibadan, Oyo State, when the incident occurred.

The gunmen stormed the road from a bush before the Sagamu Interchange and started shooting at the bus.

The passengers and the driver were said to have scampered for safety, as some hid under the bus.

However, the intervention of policemen in the area foiled the attack.

A tweet says “At about 9am when I drove through the (Lagos-Ibadan) expressway there was heavy security presence. Mostly the police, some soldiers, amotekun, customs and FRSC officials.

I felt safe driving through. I ply that route regularly and I hope that this security challenge will be short lived.”

Meanwhile, witness present at the scene reported that “about 6:39pm, a guy was shot in the leg, we don’t know who he is…and that Sienna bus has blood all inside it.

A video captured the bus, which was riddled with bullets, as one of the passengers narrated their ordeal.

The passenger  said, “We were only lucky to escape the gunmen, but many of us have been injured by the bullets and our bus has been badly damaged too.”

He said, “I thought I was dead, having been shot by them. They faced our vehicle, shooting at us; we all lay down except the driver, who was the target. They thought we were all dead and retreated into the bush. The joint patrol team of police officers from Ogun and Oyo states arrived at the scene later.”

The State Police PRO, Abimbola Oyeyemi, confirmed the attack, adding that the police foiled it.

The police spokesman, however, said he was not aware if any passenger was injured during the incident.

He said, “The report sent to me by the DPO, who was on ground, did not indicate that any passenger was shot.

“The incident happened on Tuesday, our men that were present there engaged them and they foiled the attempt to kidnap travellers on that road. The policemen engaged them and even some of them escaped with bullet wounds.”

And among the kidnapped victims were students of the Moshood Abiola Polytechnic, Abeokuta, Ogun State, and a former Deputy Vice Chancellor of the University of Ibadan, Adigun Agbaje.

The inspector general of police 9IGP), Usman Alkali Baba, at the state house briefing on the 11th November 2022 (today), was asked about the security situation on the Lagos-Ibadan expressway. He said, “this week, we have increased our presence on the road”.