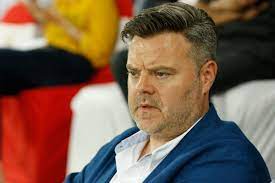 Chelsea confirmed that Willoughby, who was previously at Man City has been dismissed on Tuesday for sending ‘inappropriate messages’ before being employed at Stamford Bridge for the second time in his career. Willoughby was only employed less than a month ago.

The complaint was made by Kim to Chelsea’s president of business Tom Glick, who hired Willoughby. According to Kim, Willoughby had been sexually harassed her before his employment by the club. She also alleges she felt threatened over the telephone while he was working for the Blues.

“Evidence of inappropriate messages sent by Mr Willoughby, prior to his appointment at Chelsea FC earlier this month, has recently been provided to and investigated by the Club. While they were sent prior to his employment at the Club, such behaviour runs absolutely counter to the workplace environment and corporate culture being established by the Club’s new ownership.

“The Club’s owners are working tirelessly to set and achieve the highest standards both on and off the pitch, and are determined to establish and nurture a culture of transparency, accountability, inclusivity, diversity and opportunity. The Club is committed to creating an environment which embodies these values.”

Kim has held talks with Chelsea and Glick, who became the first appointment of the new Todd Boehly-Clearlake Capital owners in July, on behalf of Chelsea owners.

But those talks have stalled since Glick added Willoughby, who he worked with at Manchester City, to the negotiations that prompted Kim to raise her concerns about his inclusion.

Kim provided Glick with a series of messages that were sent last year by Willougby in which he asked her if she was naked, brought up the subject of having sex, posted an alleged sexually explicit video and suggested he would arrange a meeting with City chief executive Ferran Soriano if she was willing to be “naughty”.