The governor of Lagos State, Mr. Babajide Sanwo-Olu, has urged the Nigerian media to practice a high level of professionalism and devotion to the ethics of the profession as the 2023 general elections approach.

He urged media professionals to shun false information, harmful reports, hate speech, and any other behavior that could undermine Nigeria’s democracy and cause division in the nation.

At the Nigeria Media Merit Awards (NMMA), which celebrated their 30th anniversary on Sunday at the Eko Hotels and Suites in Victoria Island, Lagos, the governor made the appeal.

Governor Sanwo-Olu advised the media to not be afraid of portraying Lagos State and Nigeria in a positive light. He served as the Chief Host at the NMMA’s 30th anniversary, where awards were given to outstanding print and broadcast journalists in roughly 40 categories.

He said: “Let me use this opportunity to lend my voice to the appeal by well-meaning compatriots to the media on the need to exercise a high level of professionalism and commitment to the ethics of the profession, especially as the 2023 general elections draw near.

“Even as the media holds powerful institutions to account, you must also reserve some of this scrutiny for yourselves, and ensure that there is no room for bad eggs and those who seek to bring a noble reputation into disrepute.

“The times we are in call for great circumspection, and great fidelity to the timeless principles of journalism; accuracy, fairness, balance, integrity. Your standards must never be lowered for anything, and definitely not in this age in which social media and the Internet enable the easy amplification of fake news and malicious reports, and hate speech, intended to give undue political advantage or to divide societies and derail democracy. 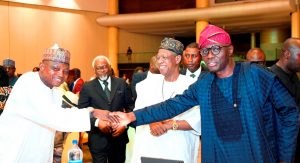 “I urge the media to continue to not shy away from showcasing Lagos State and Nigeria in good light, highlighting and projecting our social, economic, and cultural opportunities and potential, as we strive to attract more domestic and foreign investment into our economy, and position ourselves on the global stage.”

In the last three years, Governor Sanwo-Olu, who has won more than 20 notable awards as Governor of the Year from various media organizations in a variety of categories, has declared that his administration would continue to create an environment that would allow media professionals in Lagos State to flourish.

“On our part in Lagos State, we will continue to give our unflinching support to the media by being at the forefront of promoting and enabling press freedom, as well as taking steps to make our government more transparent and accountable to the people of the State and the world at large.

“Our administration is committed to providing good governance and dividends of democracy and we definitely would require the partnership and collaboration of the fourth estate of the realm as we proceed on this journey.

“Lagos and the NMMA indeed share something in common; we have continued to live up to the expectation of our founding fathers and we are both determined to set new standards of excellence and break new grounds,” he said.

Governor Sanwo-Olu commended all the awardees for being found worthy of the prestigious award in different categories, adding that the “Award is a call to greater and more dedicated service, an encouragement to higher achievements through the power of your pen.” 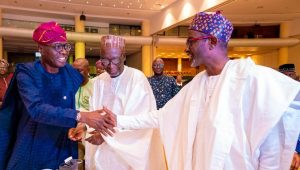 He also congratulated the Board of Trustees and the management of Nigeria Media Merit Awards for “sustaining the vision and ideals of this platform, as conceived by the founding fathers, who would all be proud of the giant tree that the modest seed of yesterday has grown into.”

Speaking on behalf of the Board of Trustees and management of the NMMA, Prof. Olu Obafemi, commended Governor Sanwo-Olu for his exemplary leadership and outstanding performance in Lagos State in the last three and half years of his first term in office.

“The Board of Trustees and the entire management of NMMA are happy with what you are doing in Lagos. We appreciate you and thank your State. We urge you to continue to perform well to deliver the goods and services in the State and to continue to be an exemplar of great works,” he said.