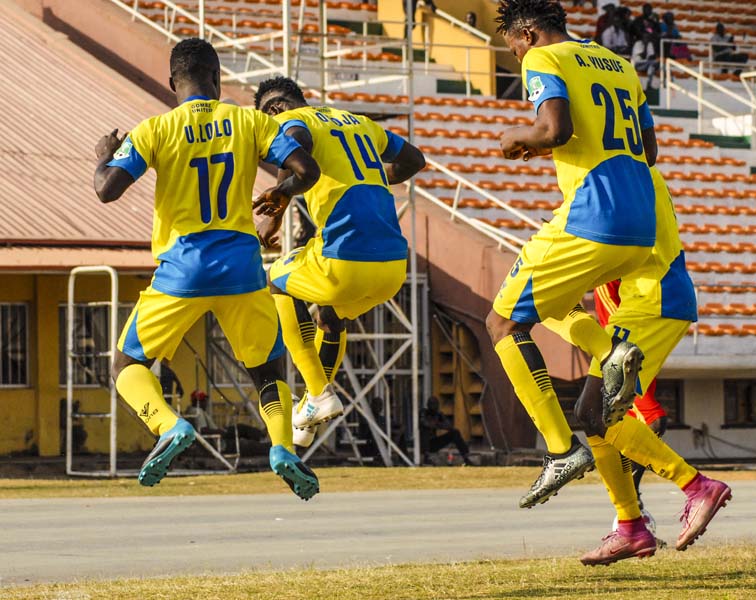 Gombe United saw their three goals lead nearly cancelled by Heartland in a midweek fixture that got their fans worked up after the visitors made a late push to score two goals in the last 30 minutes.

The restlessness in the stands did not escape Gombe United Coach, Aliyu Zubairu who would later express displeasure at the hostile reaction of the fans during the match.

The home fans began booing their players even when they were still leading towards the end of the game and this, Zubairu believes was not the right attitude.

“Gombe fans need to change their character, they are no longer motivating these boys, even when they are leading they were still not okay. it’s not motivating at all”, lamented Zubairu

In the game, Gombe United leading goal scorer Abdulazeez Yusuf tapped home from close range to open the scoring for the host in the last moment of the tough first half. The forward has now level on goals with Rivers United duo of Ishaq Rafiu and Chijioke Akuneto on 14 goals at the top of the league’s goal-scoring chat.

Ismail Bello who came off the bench during the first half after replacing injured Issa Abdullahi made an immediate impact by providing an assist to the first goal before recording his name on the score sheet just two minutes after the restart. Usman Abbas’s delivery met the sensational winger inside Heartland box and he reacted perfectly with a beautiful finish to beat Femi Thomas in goal.

Gombe scored another beauty just after the hour mark when Kelechi Chimezie laid a set piece for awaiting Barnabas Daniel who blasted a low strike beyond the reach of the Thomas.

Gombe United move to eight place while Heartland remains in the relegation waters as they lost one place to 18 position behind Lobi Stars of Makurdi.

After just one season at Stamford Bridge, Chelsea and Inter Milan have agreed on a loan deal for striker Romelu...

On Tuesday morning, Neymar's private jet had to make an emergency landing in the northern Brazilian city of Boa Vista....

Barcelona have blamed their harsh negotiating attitude on Frenkie de Jong during trade negotiations with Manchester United to La Liga's...

On Monday, a Spanish court sentenced former Cameroon striker Samuel Eto'o to a 22-month suspended prison sentence after he admitted...

Cameroon's football federation said in a statement that it has summoned 44 players from eight different teams for a hearing...

The Nigeria Football Federation has been directed by the Federal Government, through the Ministry of Youth and Sports Development, to...