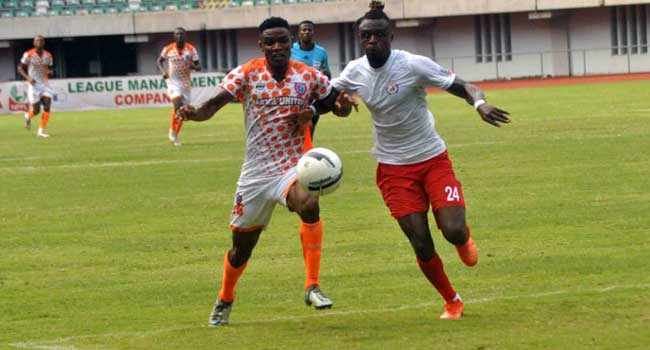 Akwa United Coach Deji Ayeni was left disappointed after his team failed to convert begging opportunities in the goalless draw against MFM of Lagos at the Godswill Akpabio stadium on Wednesday.

Seven games before the end of the campaign, the Promise Keepers had hoped that a result for them against the Lagos side would put the team in strong position for a possible late push for a continental spot.

But the former Sunshine Stars handler, who joined the league champions in mid-season, seem to nurse a belief that his team can still pursue a third place finish despite the result.

“The continental ticket is still very possible. We may have not gotten it right today, but all hope is not lost. We played a team (MFM) struggling to breathe. They gave everything for the point. We can also get something from our next game in Owerri”, Ayeni said during the post match interview.

Akwa United had themselves to blame, missing glaring opportunities in the first half. Adam Yakubu and David Onovo should have put the Uyo side in front in the 6th and 12th minutes, but failed to make it count despite having perfect control of the ball inside the penalty area on both occasions.

A late opportunity for Seth Mayi on 89 minutes could have sealed the fixture for Ayeni’s men, but his effort from 15 yards slightly skipped target.

The result pushes Akwa United further down to 7th on the log, six points adrift of Rangers International in the race for third spot. Rangers got the better of Wikki Tourists 2-1 to extend their advantage.

Enyimba move to 4th place on the log, three points ahead of the Promise Keepers, while Remo Stars and Kwara United are two points and a point ahead of the league champions.

MFM Coach Festus Allen is confident his side can beat the drop if they can put up such spirited display in the coming matches. The Lagos side move a place from bottom, two points better than Dakkada FC, who are with two games to spare.

According to trustworthy transfer journalist Fabrizio Romano, Chelsea and Leeds have reached an agreement for the transfer of Brazilian winger Raphinha...

Manchester United are attempting to outbid Lyon to the signing of Dutch left-back Tyrell Malacia, according to sources. Sources said that...

In preparation for the third window of the FIBA African World Cup qualifiers, the Nigeria Basketball Federation on Tuesday unveiled...