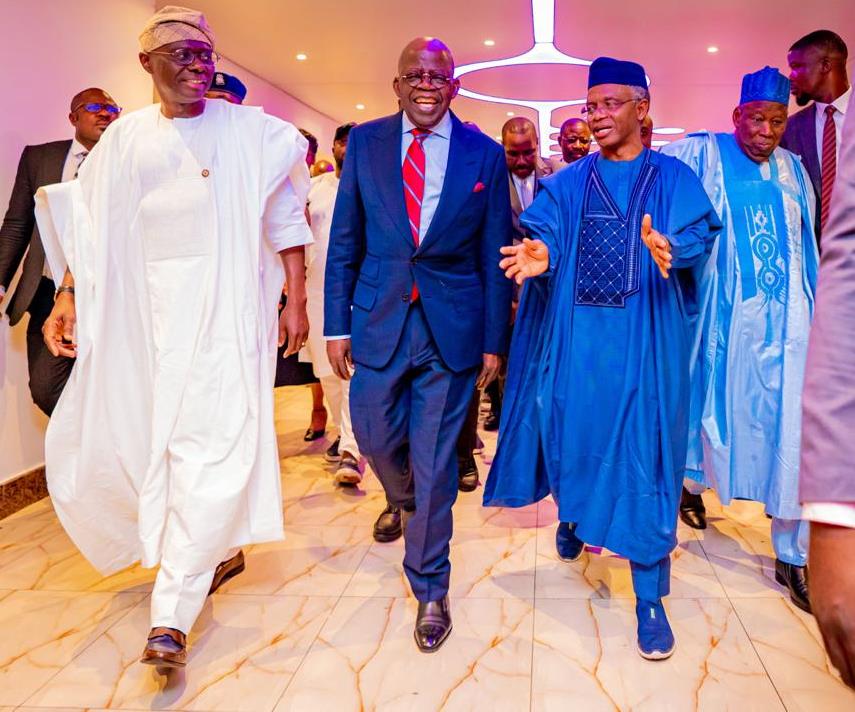 ****Sanwo-Olu to private sector: ‘Only Tinubu among contenders has magic wand to turn challenges to opportunities’

Asiwaju Bola Ahmed Tinubu, the All Progressives Congress (APC) presidential candidate has said that benefits will be realized through cooperation between the public and private sectors, adding that the central initiatives of his economic policies would not be restricted to the exclusive purview of one sector.

He has now also, provided business executives, investors, and captains of industry with a glimpse into his economic platform.

During an interactive discussion with industrialists, business executives, entrepreneurs, and foreign investors in Lagos on Tuesday, Tinubu and his team explained his economic strategy to the organized private sector.

The forum, held at the Eko Hotels and Suites in Victoria Island, was organised at the instance of the Lagos State Government. 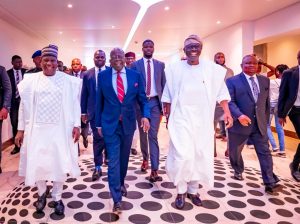 The 2023 presidential election, according to Tinubu, will be another chance for Nigeria, which he claims is on the verge of greatness or apathy.

According to Tinubu, the government and the private sector should always be at war, but not as rivals. He asserted that in order to defeat the shared foes of scarcity, underdevelopment, unemployment, and the terror they instill in the citizenry, the government and business community must unite as unbreakable friends.

The APC candidate said his administration would be targeting double digit GDP for the country to reduce the poverty rate and revive industries by bringing the nation’s industrial policy to life.

Tinubu said: “I share a few ideas that provide some insight into my vision for a more prosperous and secure nation where hope is renewed and despair rebuffed. All Nigerians must be partners in our better future. We must maintain the spirit of respectful and productive dialogue. At times what I say may help you. Other times, what you say may enlighten me. We must always talk and confer with the best of intentions. Just as I maintain open-door policy before the election, I shall continue to honour it after the election.

“We shall not be satisfied by bolstering traditional sectors. We will foster productive excellence in new areas, such as manufacturing and the Nollywood entertainment sector. Through active participation in the digital economy, we shall make Nigeria a leader, instead of a bystander, in the fourth industrial revolution. We will seek a consumer credit revolution, working in concert with the banking sector. Credit at affordable rates enables the purchase of more home made products and the construction of more homes. The standard of living shall rise and the strength of the business sector shall increase in similar measure.” 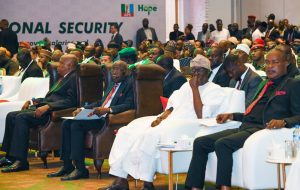 The APC presidential candidate said his experience in both private sector and public office afforded him a special appreciation of the economic potency that could be achieved leveraging collaboration between the government and the business community.

Tinubu said Lagos was the appropriate location for the private sector engagement, because the State’s economic growth had become his visible experiment that could support his claim of competency and ability.

He said: “We turned this Lagos into a safer, more prosperous place where people can go about any legitimate vocation or venture regardless of their ethnicity, religion, region or prior social station. We did more than open Lagos for business. We opened the door for all Nigerians to join and experience the decent things progressive democratic governance can bring.

“May I remind you that when I first entered office, Lagos was a different story. My team and I developed a development master plan for Lagos. I can say that plan has been largely successful. The pragmatic problem solving and teamwork that has improved the fortunes of Lagos, is what I want to bring to the nation. I ask for your help as the task ahead is doable but also difficult.”

Shettima told the business community Tinubu remained fit to succeed President Muhammadu Buhari, dispelling the claims that the APC candidate is not physically capable to lead.

The Vice Presidential candidate said: “We are not preparing for an Olympic, but an institution that harnesses the talents of humans to greatness. The respect the black man gets across the world is connected to the performance of Nigeria. We are not promising you heaven and earth, we are promising a hope for a better tomorrow.”

The Director General of Tinubu-Shettima Presidential Campaign Council and Governor of Plateau State, Simon Lalong, noted that marketing Tinubu to the business community won’t be a difficult task, given the antecedent of the candidate in turning hopeless people to business owners. 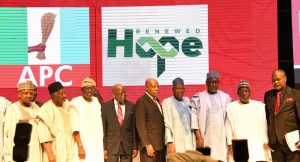 Also, the APC National Chairman, Sen. Abdullahi Adamu, who was represented at the event, said the party’s presidential candidate had the gravitas and the capacity to lead, saying Tinubu’s vision highlighted a new path of prosperity for Nigeria.

“Put your confidence in Asiwaju, he will not disappoint you,” Adamu told the business community.

Governor Babajide Sanwo-Olu set the tone for the engagement, noting that Tinubu’s meeting with the organised private sector players way ahead of his fellow contenders in the presidential race demonstrated the APC candidate’s commitment and seriousness to drive the desired change expected in the national economy.

The Lagos Governor said his predecessor was no stranger to the needs, concerns and interests of the private sector, stressing that Tinubu, as a visionary political economist, understood the pulse of investors and possessed the magic wand to turn around contemporary challenges facing the business community and change their concerns to positive results.

Sanwo-Olu said: “Asiwaju Tinubu is a man that has been able to combine political acumen with the understanding of the economy and economics of every jurisdiction. As Governor of Lagos, Tinubu pioneered several firsts which still stand till today. During Asiwaju’s tenure, he initiated the idea of the Economic Summit as a catalyst for economic development. He started in Lagos with the Ehingbeti Summit in 2001. That summit has continued to lead the successive administrations after him into various applaudable economic agendas.

“Under the Tinubu’s leadership, Lagos became the first sub-national entity to bring about the Independent Power Project (IPP) and first state to initiate the idea of establishing a seaport. Yesterday (last Monday), that vision came to fruition as we witnessed the completion of Lekki Deep Seaport. This speaks to the sheer doggedness and audacity of this man of vision. Eko Atlantic City is today the biggest real estate developed in this part of Africa through reclamation of the ocean. All thanks to the vision of Asiwaju to turn problems to opportunities.”

The Governor said the immersion of private sector professionals in public governance was an idea fiercely pursued by Tinubu during his tenure as Lagos Governor, stressing that the APC candidate created a first-rated private sector-driven cabinet that remained the envy of every government in the current republic.

Sanwo-Olu said Tinubu would bring his private sector dexterity and acumen to bear in administering the country, as the APC presidential standard bearer understood the pains and concerns of those in the business sector.

“Today, Tinubu is here as a politician and leader of our party. On the other side, you all see a man that is compassionate, intelligent, business-driven and has acumen to solve the challenges the private sector experiences on a daily basis. I present to you the man that has what it takes to lead this country forward to the prosperous future with Renewed Hope,” Lagos Governor said.